Photo of the Day: What the world needs now... 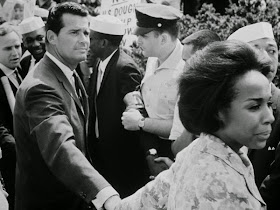 Will Bunch writes that "What the world needs now is more like this guy...James Garner." He goes on to quote this from a 2011 interview with Garner.

Garner is what he calls a "bleeding-heart liberal," having participated in the 1963 civil rights March on Washington and later advocating for a number of progressive causes. He voted for Dwight D. Eisenhower in 1952, he writes, but never cast a ballot for a Republican again. He voted for Adlai Stevenson in 1956, and calls him "the most intelligent presidential candidate we've ever had. I think Obama runs a close second."

And then Bunch adds his own commentary about current events.


Yes, the world needs some replacements for James Garner, and it also needs, in the words of the song, some love, sweet, love. One reason I posted this photo tonight is that it struck me as the antidote to the last week -- to the brute force and continuing stupidity in eastern Ukraine, to the non-stop killing in Gaza, to the haters blockading buses of refugee kids fleeing from violence, to the senseless police brutality that took place this week on a Staten Island street corner. It's hard to deal sometimes. For just a minute or two, I'd rather think of these two holding hands in the maelstrom, 51 years ago this summer.

Hat tip to my friend Alan who somehow knew I needed this today.

I'm going to let the kids of PS22 finish things out for me.