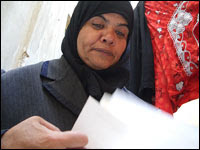 As we hear all the surreal talk coming out of DC about Iraq these last two days, I've been thinking about the millions of refugees that "withdrew" a long time ago. This is one of them. Her name is Ahlam al Goubori, a 42-year-old mother of three.

At one point, she believed the US was really trying to help her country and went to work helping settle claims for Iraqis injured or killed by the US military, served on her city council and arranged medical care for the poor. But she was seen as a traitor by sectarian groups in her country.

In 2005 she was kidnapped, held for 8 days, tortured and questioned. Her brothers paid a ransom for her release, but had to promise that she would leave Iraq. With commendations and letters of support from members of the Iraq occupation, her application for resettlement in the US is on hold.

Now in Damascus, she has opened her small apartment as a school for children four times a week. She doens't plan to go back, even if the fighting stops.

Here is what she says about her experience (from NPR):

"Something broken inside me," Goubori said. "After all that I did, and I get kidnapped and threatened and forced to leave Iraq. This broke my heart."

My heart breaks for you Ahlam, and the millions of others too.
Posted by Nancy LeTourneau