June 21, 2008
Today I'm going to quote mostly from a book that I have just begun reading - but has already had an enormous impact on me. It's The Bond Between Women: A Journey to Fierce Compassion by China Galland. Here's a bit from the synopsis.

Around the world, women are working for healing, and the lives of these women reveal an unusual source of strength: the fierceness of compassion, symbolized in ancient icons, images, and archetypes of the divine feminine. Known to Buddhists in Nepal and Tibet as Tara, to Hindus in India as the goddess Durga, to Catholics in Europe and Latin America as the Black Madonna, and as Jemanja in the Afro-Brazilian tradition of Candomble, this fierce divine feminine arises when the world is on the brink of destruction, and saves us, the ancient stories say.

Galland begins this journey by telling the tale of the Hindu Goddess Durga. 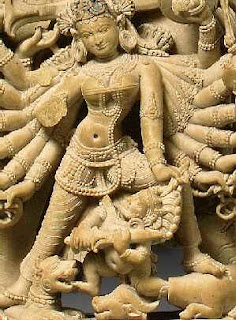 The world stood posed on the brink of destruction once before.

Rivers dried up, plants refused to grow. People starved. There was war everywhere. Slaughter prevailed. Dancing stopped, even singing was forgotten. The demons, known as the asuras, were loose in the world, raging unchecked across heaven and earth, drunk with destruction. No one could stop them, not even the gods, who had been defeated, one by one.

Humiliated, the gods withdrew to the heights of the Himalayas and took counsel amongst themselves, to no avail. Their dilemma was insoluble. They had lost all power against these demons and could only leave the world to its inevitable destruction. Then it was remembered that this time had been foretold - a demon would come to destroy the world, and only a woman could defeat this demon - only a woman could save the world.

Durga is called forth and takes on many battles with the demons - defeating all. Until the final battle that Galland describes this way.

Time stopped as the Goddess and the Demon embraced in their fight, turning and pitching, rolling across the sky. The cosmos groaned with the enormity of their encounter. At the last moment, Durga pierced Sumbha's heart with her dagger and he fell tumbling out of the heavens. The world was safe at last.

Galland draws the following conclusions from this ancient story.

This is what gives this ancient story such a contemporary ring. It tells us that the demons can be defeated, that the world can be saved - but not by traditional solutions, and not until defeat has been acknowledged.

The solutions would come from unexpected quarters, from a place they had not thought to look - from the Goddess, from the power of the feminine. The stone that had been cast out had to become the foundation.

And in continuing this commentary, it is important to note that it is the final scene of the battle that is the most telling. Durga had killed the Demon Mahisasura many times in the earlier battles in this story, and though she cut off his head, he would come back to life in another form. He was not decisively defeated until his heart was pierced. This is the crucial element in what the story tells us. These human failings, these "demons" who threaten us can be defeated only when we go beyond reason, when we pierce the heart.

Galland writes about her own "heart piercing" in the opening prologue.

I want to begin with what is beautiful. I want this because what follows is hard for me to tell you. It is a small part of a much larger story, but it is the thread that drew me through the eye of the needle.

The waters were rising, flooding this constricted place inside myself. I had to swim for my life to get to where the way opened, to make my way to a broader shore. To safety. I could no longer stay in the narrows, handless, voiceless. But this is not what I want to write.

I want to write about what is beautiful, about how wisdom - the principle of enlightenment - is within each one of us, about how it is unavoidable.

I want to write about a passionately happy, blissful source of wisdom, a dynamic, fierce female divinity who awaits our discovery - awaits the sun and water of our attention - to transform our life.

Is this, in fact, the power that can defeat the demons and save the world? If so, she's there waiting...

Know the Mystery
that if that which thou seekest
thou findest not within thee,
thou will never find it without thee...

I Have Been With Thee From The Beginning

And I await thee now.
Blessed Be.