Can you guess who said this?

This isn't a competition. But I'm going to provide you with a quote and ask you to guess who said it.


...I had my doubts that linking arms, chanting slogans, hanging effigies, and shouting at passersby were alway the most effective tactics. I could see that troubling the waters was occasionally necessary to bring attention to the urgency of some problem. But this style of political expression sometimes becomes an end in itself and can lose potency if used routinely. If you shout too loudly and too often, people tend to cover their ears...

Quiet pragmatism, of course, lacks the romance of vocal militancy. But I felt myself more a mediator than a crusader. My strengths were reasoning, crafting compromises, finding the good and the good faith on both sides of an argument, and using that to build a bridge. Always, my first question was, what's the goal? And then, who must be persuaded if it is to be accomplished? A respectful dialogue with one's opponent almost invariably goes further than a harangue outside his or her window. If you want to change someone's mind, you must understand what need shapes his or her opinion. To prevail, you must first listen...

I know this kind of approach doesn't work with people like the Republicans who have made a strategic decision to oppose. But then shouting at them doesn't change their mind either. All it does is fill the emotional needs of the shouter. And the end result is the same. Stalemate.

What the author is doing is thinking a bit more deeply about how someone changes their mind. S/he says that if that is your goal (rather than meeting your own emotional need to ventilate), you first have to listen and understand the need that shapes their opinion. That opens the door to conversation rather than a shouting match.

Would it surprise you to hear that the author is Supreme Court Justice Sonia Sotomayor and that the quote comes from her book My Beloved World?

Perhaps now you understand why President Obama picked her as his first appointment to the Supreme Court. They came from very different backgrounds, but learned some of the same lessons.

Yep, she is one very wise Latina. 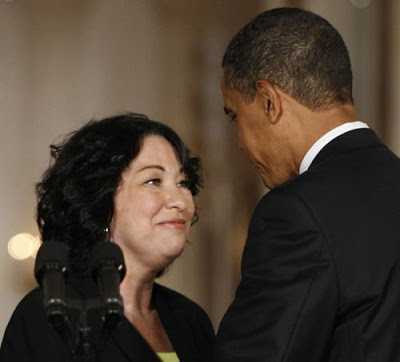