The White House  responded to a petition to build a Death Star.


The Administration shares your desire for job creation and a strong national defense, but a Death Star isn't on the horizon. Here are a few reasons:
We don't have a Death Star, but we do have floating robot assistants on the Space Station, a President who knows his way around a light saber and advanced (marshmallow) cannon, and the Defense Advanced Research Projects Agency, which is supporting research on building Luke's arm, floating droids, and quadruped walkers.

We are living in the future! Enjoy it. Or better yet, help build it by pursuing a career in a science, technology, engineering or math-related field. The President has held the first-ever White House science fairs and Astronomy Night on the South Lawn because he knows these domains are critical to our country's future, and to ensuring the United States continues leading the world in doing big things.

If you do pursue a career in a science, technology, engineering or math-related field, the Force will be with us! Remember, the Death Star's power to destroy a planet, or even a whole star system, is insignificant next to the power of the Force. 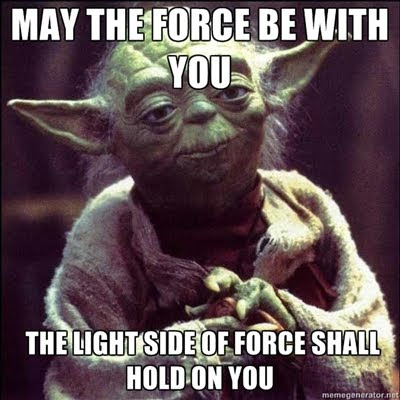