To many Mexican Americans, we are the immigrants

As the debate about immigration reform heats up, it might be helpful to pay some attention to the history of how we got here. Lets face it - the real controversy in this issue is not about immigration in general - but about Mexican Americans. And though we don't pay much attention to it - this conflict has been going on for a very long time.

The whole thing can be summed up in two words...Manifest Destiny.


the belief or doctrine, held chiefly in the middle and latter part of the 19th century, that it was the destiny of the U.S. to expand its territory over the whole of North America and to extend and enhance its political, social, and economic influences.

It was this belief that led President Polk to initiate the Mexican American War in 1846 after Texas  declared independence from Mexico. At the conclusion of that war, Mexico ceded much of the Southwest to the United States. 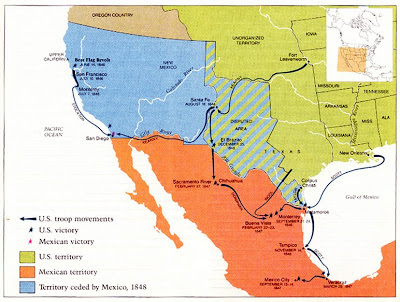 For the Mexicans living in those areas, it was the influx of European Americans who were the immigrants. Many of the people being harassed by laws such as the one passed in Arizona a few years ago can trace their ancestry back to the days before white people began to question their status as "real Americans."

In reading about some of this history, its fascinating to realize how race has always played such an important role in the development of this country. For example, the people who opposed the Mexican American war and the annexation of these areas as part of the United States did so because they were abolitionist and were fighting the expansion of slavery. In addition, some who opposed it did so because, when they talked about "manifest destiny," they weren't talking about "those people." Here is how that was expressed by Senator John Calhoun of South Carolina.

[W]e have never dreamt of incorporating into our Union any but the Caucasian race—the free white race. To incorporate Mexico, would be the very first instance of the kind, of incorporating an Indian race; for more than half of the Mexicans are Indians, and the other is composed chiefly of mixed tribes. I protest against such a union as that! Ours, sir, is the Government of a white race.

So this whole thing was controversial from the start.

Its also interesting how the concept of manifest destiny is - in some ways - still with us. The words we use to describe it are different now, but have their origins in the same idea. The doctrine of manifest destiny was built on the concept of American Exceptionalism that is so in-vogue today amongst the nativists, and the idea of the United States as a City Upon a Hill that was revived by Reagan. More recently these themes were at the heart of George W. Bush's rational for invading Iraq. In many ways its always been just another name for white American privilege.

As we approach this discussion, it might be helpful to understand that what we'll be fighting is the same battle that has been waging in this country from its founding...when we say that "all men are created equal," do we really mean ALL men (and women)?
at January 29, 2013