How we defeated the teapublicans in Minnesota

Just like many light blue/swing states, Minnesota was bombarded by the teapublican craze in 2010. Once the midterm elections were over, our state legislature was pure red. Lucky for us, the governor's race was a three-way contest. And so our Democratic nominee - Mark Dayton - squeaked out a win. That made all the difference.

Then, in the 2012 election, the state legislature turned blue once again.

As a result of all this, Minnesota set up its own health care exchange (troubled initially, but getting MUCH better) and expanded Medicaid under Obamacare.  Last year marriage equality came to the state - not as a result of a court ruling, but because it was passed by the legislature. Finally, we've had no voting restrictions, stand your ground laws, right to work laws, or curbs on reproductive freedom.

All of that happened because Democrats won the state governor's race by four tenths of a point in 2010. Think about THAT!

In a few months there are 36 governorships up for grabs - many involving unpopular Republicans in blue/swing states.  Anyone who thinks their vote doesn't matter should simply compare what is happening in Minnesota to our sister state of Wisconsin - where Gov. Scott Walker has been in charge for the last four years. And then get involved. It matters!!! 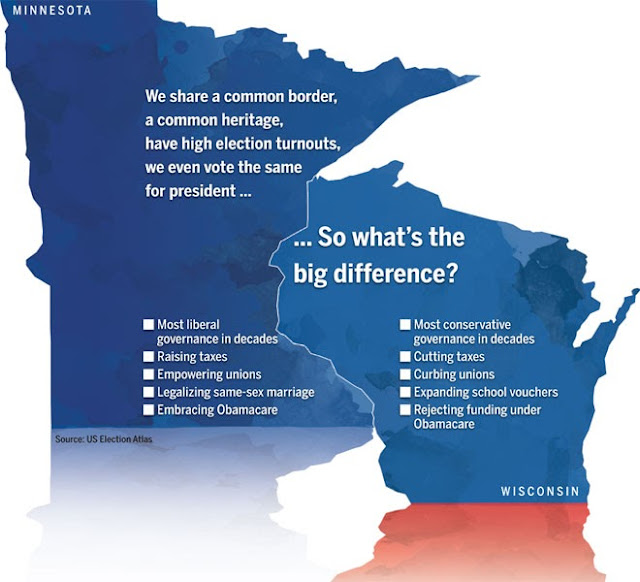 Email ThisBlogThis!Share to TwitterShare to FacebookShare to Pinterest
Labels: Elections