Most of us know that Obamacare bears zero resemblance to how it is often characterized by conservatives - as a government takeover of healthcare. The majority of people in this country will see no change in how they are insured - via private plans offered by their employer. But for those on the individual market, there is now the option of buying private plans through the health care marketplace (exchanges) with the possibility of government subsidies.

But who knew that those exchanges would actually cause an increase in the free market concept known as "competition?" That's pretty much what this Kaiser Family Foundation research suggests. They only looked at seven states who have set up their own exchanges (as opposed to participating in the federal exchange) and have released their data. But its fascinating.

Lets take a look at my home state - Minnesota. Here is the breakdown of market share for individuals prior to the exchanges compared to now. 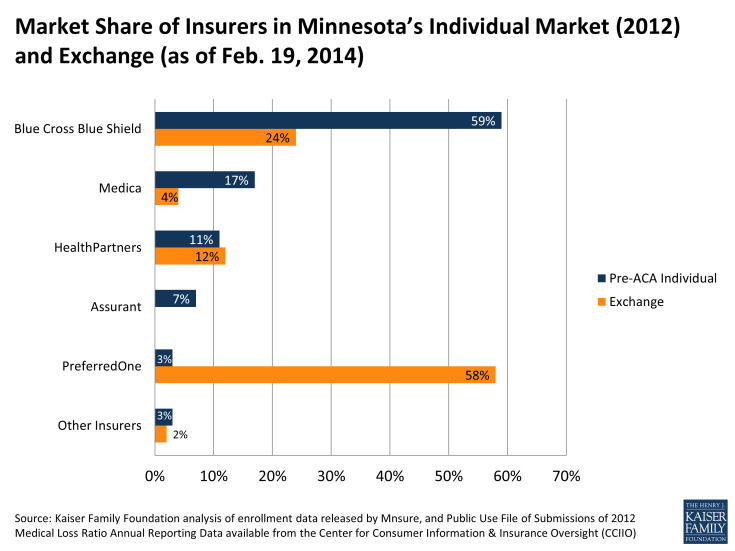 Blue Cross/Blue Shield has lost 35% of the individual market due to the exchanges and PreferredOne has gained 55%. As someone who recently shopped for and purchased health insurance on this exchange, I can tell you that PreferredOne was offering significantly lower premiums than the other plans. Medica (my previous insurer) also lost 13% of the market. Theirs were some of the most expensive plans on the exchange.

Another state with interesting results is Nevada. 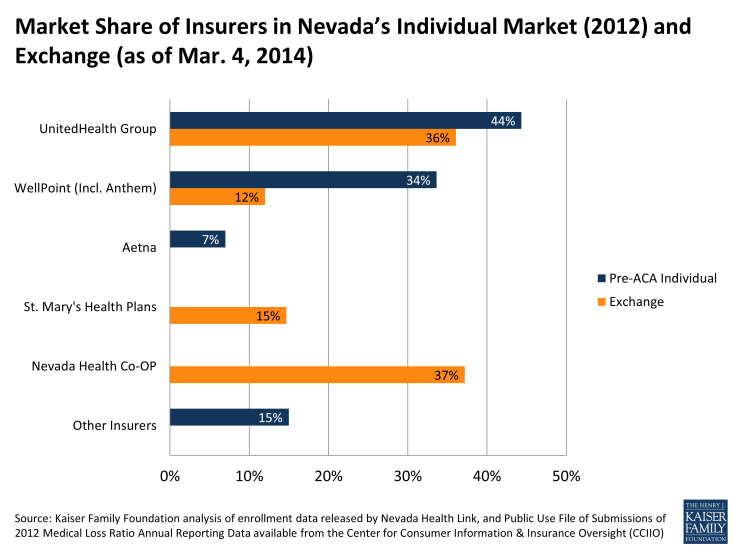 Clearly UnitedHealthGroup and WellPoint are the biggest losers there. But look who picked up the slack...Nevada Health Co-op. That is the result of an Obamacare provision that was pretty much ignored - the Consumer Operated and Oriented Plan Program in which the federal government provided loans for the development of qualified nonprofit insurers to compete on the exchanges. While the results have been mixed, Nevada is not the only state where this program is succeeding.


In Maine, the insurer that has enrolled the most Obamacare customers isn’t the state’s well-established Blue Cross Blue Shield plan, owned by WellPoint Inc. It’s WellPoint’s only rival: Maine Community Health Options, a startup that didn’t exist three years ago.

The newcomer, funded primarily by taxpayer money lent under the U.S. health-care law, has won about 80 percent of the market so far in Maine’s new insurance exchange, exceeding its own expectations, said Kevin Lewis, the chief executive officer.

Obamacare opponents predicted early on that insurance co-ops created by the law would fail, and that much of the $2.1 billion they were loaned to get started would be lost. Instead, the 23 co-ops that now exist nationally have enrolled about 300,000 people in health plans by combining low premiums with a certain homespun appeal, according to company executives.

The critique we hear about Obamacare from the left most often is that it was nothing but a giveaway to the big insurance companies. But combined with the information above, take a look at some of this data taken from the Kaiser report:

The percentages in those large states represent lots of people that are finding a better deal by shopping on the exchanges. You can be sure that companies like WellPoint are noticing and will be working to bring down their costs in the future.

The truth is - Obamacare is just getting started. As more states experiment and learn from results like this, we'll be seeing a lot more of this kind of good news.
at March 17, 2014