An open letter to my "disappointed" Democratic friends

Back in 2010 you told us that you were disappointed in the President you helped elect. And because of that, you weren't motivated enough to vote in the midterms. While I don't share your disappointment, I want to say that I hear you.

Now we're facing another midterm election and we have the benefit of hindsight to tell us what changed as a result of your lack of enthusiasm.

Sure, you might have wanted single payer and a larger stimulus package. But you have to admit that Obamacare is doing an awful lot of good. And perhaps you should read Michael Grunwald's book The New New Deal to learn how the American Recovery Act was way more than many of us thought it was at the time. Of course the list of legislative accomplishments during those first two years goes beyond those two milestones to include things like the Lilly Ledbetter Fair Pay Act and an end to Don't Ask Don't Tell.

But since 2010, take a look at what has (or better yet, hasn't) happened. As President Obama said, we've witnessed the least productive Congress in modern history. 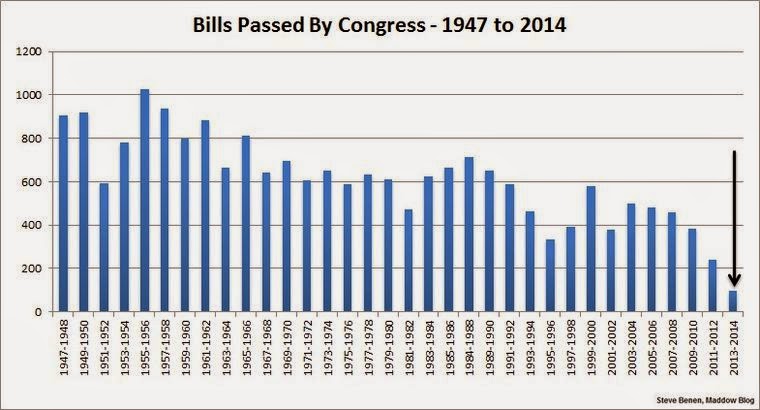 If you originally voted for President Obama because you wanted to see some changes, we were on that path prior to 2010. Its all come to a screeching halt since then.

Come November this year we're going to have an opportunity to decide whether we want more gridlock, government shutdowns, endless debates over repealing Obamacare and a political environment that feeds the Republican narrative by fueling cynicism, or whether we want a Congress that will work with President Obama to tackle what he believes is "the defining issue of our time."


I believe this is the defining challenge of our time: Making sure our economy works for every working American. It’s why I ran for President. It was at the center of last year’s campaign. It drives everything I do in this office. And I know I’ve raised this issue before, and some will ask why I raise the issue again right now. I do it because the outcomes of the debates we’re having right now -- whether it’s health care, or the budget, or reforming our housing and financial systems -- all these things will have real, practical implications for every American. And I am convinced that the decisions we make on these issues over the next few years will determine whether or not our children will grow up in an America where opportunity is real.

Its "gut check" time for all of us. I don't know about you, but after these last four years I'm actually psyched to get back to Democrats arguing with other Democrats over HOW MUCH change we want to see rather than being pissed at Republicans all the time for their total obstruction. There's a lot riding on this one. I hope we can all work together to make that happen.

Email ThisBlogThis!Share to TwitterShare to FacebookShare to Pinterest
Labels: Elections