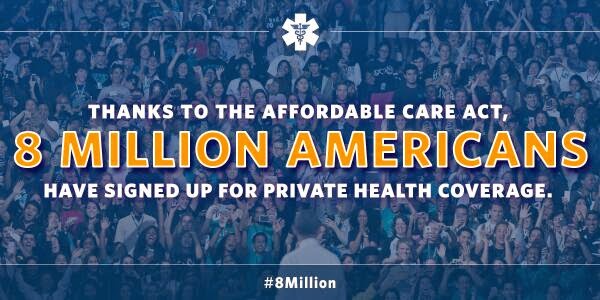 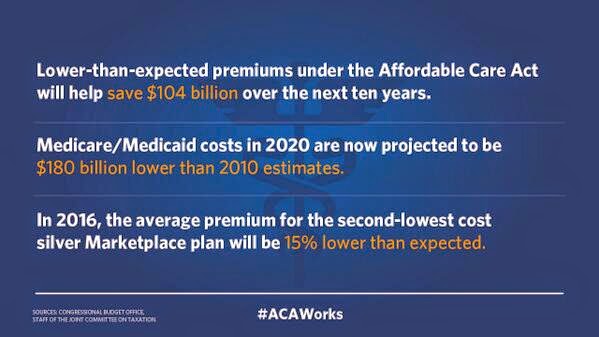 Those posters highlight just a few facts about the success of Obamacare. You can find a lot more here.

All of that creates a pretty big dilemma for Republicans who - from day one of the debate about health care reform - have chosen to simply obstruct anything President Obama and the Democrats tried to do. As David Frum told them 4 years ago, by refusing to even participate in the discussion, they were buying into creating their own Waterloo.


No illusions please: This bill will not be repealed. Even if Republicans scored a 1994 style landslide in November, how many votes could we muster to re-open the “doughnut hole” and charge seniors more for prescription drugs? How many votes to re-allow insurers to rescind policies when they discover a pre-existing condition? How many votes to banish 25 year olds from their parents’ insurance coverage? And even if the votes were there – would President Obama sign such a repeal?

We followed the most radical voices in the party and the movement, and they led us to abject and irreversible defeat.

Of course it was that kind of pragmatic talk that got Frum kicked out of the Republican tribe.

After Obamacare passed, the Republican mantra became "Repeal and Replace." The trouble is, they never got around to the "Replace" part. And now that its working for millions of Americans, they have a problem. As one Republican aid told Sahil Kapur:


As far as repeal and replace goes, the problem with replace is that if you really want people to have these new benefits, it looks a hell of a lot like the Affordable Care Act. ... To make something like that work, you have to move in the direction of the ACA.

Yesterday President Obama said, "This thing is working." That's what happens when you build a policy on pragmatism. Where does that leave the Republicans? Brian Beutler points out that The Republican Position on Obamacare Makes No Sense Anymore. Because nobody believes there is any GOP alternative to Obamacare.

It all reminds me of something Mark Schmitt wrote about President Obama's approach to creating change way back in 2007.


One way to deal with that kind of bad-faith opposition is to draw the person in, treat them as if they were operating in good faith, and draw them into a conversation about how they actually would solve the problem. If they have nothing, it shows. And that's not a tactic of bipartisan Washington idealists -- it's a hard-nosed tactic of community organizers, who are acutely aware of power and conflict.

Being pragmatic doesn't tend to get you the soundbite or linkbait that so often fuels our hysteria-driven media. But if you're willing to play the long game, it not only works...it is an excellent strategy for boxing in the obstructionists.
at April 18, 2014