Boehner watching his back 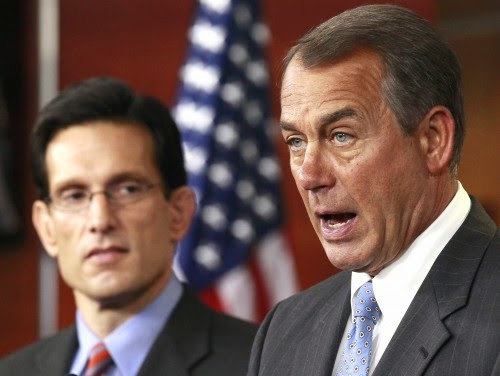 Media Matters provides a quote from Tim Geithner's book that confirms what many of us have always guessed was the root of the problem in Congress. Geithner is specifically referring to the negotiations between President Obama and Speaker Boehner on fiscal issues in an attempt to forge a Grand Bargain.

There was a weird dynamic to the talks, because Boehner truly seemed to want a deal, while Cantor and his colleagues seems [sic] to be watching Boehner to make sure he didn't cut a deal. I found the Speaker's obvious discomfort with the far right wing of his caucus sort of appealing; it was too visceral to be entirely tactical. He always warned that their intransigence might scuttle any compromise, that they would consider any deal he cut with the President inherently suspect.

Remember when Boehner said he wasn't going to negotiate with President Obama one-on-one anymore? Yeah, he tried to pin that one on the President, but the truth is that he was just looking for a way out of that bind. But ultimately, there's no getting around it.

At this point, the fate of immigration reform as well as the future of the Republican Party's relationship with the Latino community is in the balance. Yesterday, the President of the U.S. Chamber of Commerce said that if Congress doesn't pass immigration reform this year, the GOP might as well not run a candidate in 2016. And President Obama has given Boehner 3 months to get it done, or he will take executive action to re-prioritize our current deportation policy - thus killing the possibility of comprehensive immigration reform for the foreseeable future.

I actually believe that - like the Grand Bargain - Boehner can see what is in the best interests of his party and wants to get immigration reform done. But he's also busy watching his back. One thought I've had recently is that perhaps appointing the Special Committee on Benghazi was his way of mollifying his caucus to allow him the room to work on it.


Those following the Tea Leaves closely from the left think GOP leaders have given Diaz-Balart, who has legislative language ready to go on some kind of legalization proposal for the 11 million, the tacit go-ahead to round up as many House Republicans as he can. “The accepted wisdom among advocates following this closely is that Boehner wants to get his done, and that Diaz-Balart and others are trying to corral Republicans so Boehner can schedule votes before the August recess,” Frank Sharry, the head of America’s voice, says.

Stranger things have happened. Of course, that would require Boehner to be more of a strategist than a coward. We'll see...
at May 13, 2014