I'm certainly no expert on Middle Eastern politics. But I know enough to realize that it is impossible to understand what is happening in Iraq (and Syria) unless you have some basic knowledge about how the various players line up in the conflict between Sunni and Shia Muslims.

According to this article, only about 10-15% of the world's Muslims are Shia (the rest are mostly Sunni). But the Shia are concentrated in the Middle East. 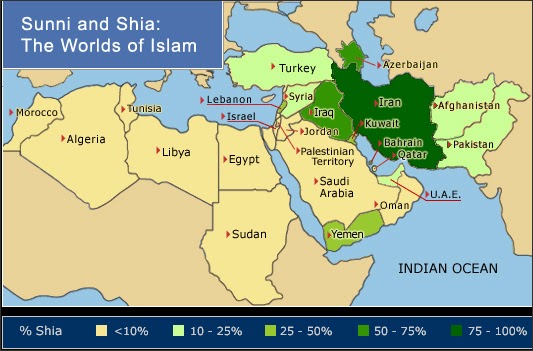 As you can see, Iran is 90% Shia, which puts them at odds with one of their closest neighbors - Saudi Arabia - which is 95% Sunni. Saddam Hussein was Sunni and brutally abused the Shia when he was in power. After the United States invaded Iraq (which is 63% Shia), the Bush administration purged all Sunni's from both political office and the military. Now its payback time for the Shiite government of Prime Minister Maliki, who is excluding and abusing the Sunni. The ISIL, which is the terrorist group that is gaining ground in Iraq, is a Sunni Muslim organization (as is al Qaeda and the Taliban).

One result of our misadventures in Iraq is that - while Saddam Hussein had waged a long bloody Sunni vs Shia war with Iran prior to our involvement - Iran and Iraq are now aligned in fighting the Sunni insurgency in Iraq.

In Syria, only 13% of the population is Shia. But their president - Bashar al-Assad - is an Alawite, a Shia sect. That is why he has the support of Iran in the civil war going on in his country, while groups like ISIL fight against him.

Both domestically and abroad, President Obama constantly comes under pressure to take sides in this Sunni/Shia conflict. Due to their long association with Saudi Arabia, many of the "hawks" in our government would like that support to go to the Sunnis (against Assad in Syria and Iran). And yet now we are faced with calls from some of the same people to align ourselves with Iran to support the Shia government of Maliki against a Sunni terrorist group.

At every step of the way, the President has resisted the pressure to take sides. Rightly so. As a matter of fact, in his remarks this morning, President Obama made any support we might give to Maliki conditional.

So any action that we may take to provide assistance to Iraqi security forces has to be joined by a serious and sincere effort by Iraq’s leaders to set aside sectarian differences, to promote stability, and account for the legitimate interests of all of Iraq’s communities, and to continue to build the capacity of an effective security force. We can’t do it for them. And in the absence of this type of political effort, short-term military action, including any assistance we might provide, won’t succeed.

This is just one example of the complex world in which our President has to engage. Beating the war drums every time someone does something we don't like is not the answer. Putting enough pressure on leaders to "set aside sectarian differences and promote stability" is exactly the right course.

P.S. Once again Fareed Zakaria is a must-read on the situation in Iraq.

UPDATE: Slightly off-topic, but don't necessarily assume that members of Congress understand these complexities. Yesterday I watched the House Armed Services Committee grill Sec. of Defense Hagel about the release of the 5 Taliban detainees. The Republican Chair of that committee actually said out loud that he didn't know what the relationship was between the Haqqani Network (that held Sgt. Bergdahl for most of the 5 years he was in captivity) and the Taliban (both are Sunni BTW). These are the people we pay to represent us on these matters...and as Chair of a relevant committee, he can't be bothered to inform himself. Geez!!!!
Posted by Nancy LeTourneau