Is the glass half full or half empty?

Two recent headlines about the exact same information are a perfect illustration of why President Obama keeps reminding us that cynicism is a choice.

U.S imprisonment rate has fallen for the fifth straight year. Here's why.

Both stories (the first at WaPo's Wonkblog and the second at Think Progress) are about this recently released report from the Bureau of Justice Statistics. But they can't both be accurate, can they?

Here's what you need to know:
If we look at the rate of inmates/100,000 residents, here is what has happened over the last five years.

Those numbers might not look dramatic. But they represent a huge change in the trajectory we've seen over the last 40 years. 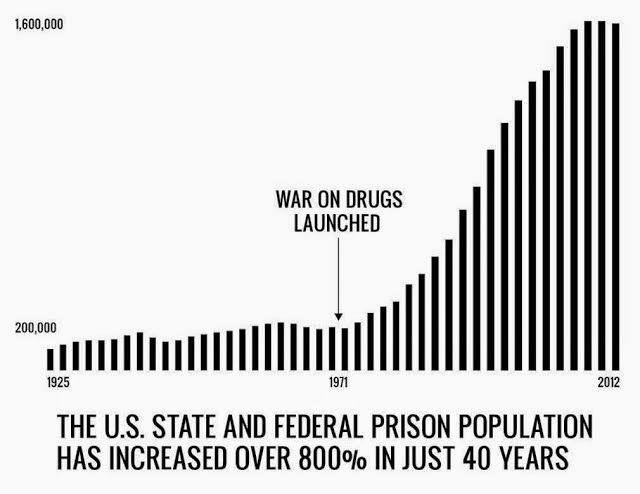 As Keith Humphreys (who wrote the first article) says:

The U.S. established mass incarceration over decades, and it will not be unmade overnight. Moving in the right direction for five straight years is splendid, but I believe we could pick up the pace while still protecting the public. My hope is that the many sentencing reforms passed in states in the past couple years have not yet had time to make as much impact as they will in the future; President Obama and AG Holder’s recent efforts at the federal level could well be in the same boat. Like the Dalai Lama, I choose to be optimistic because I cannot think of a better alternative.

So its interesting to wonder why Think Progress - normally an excellent source of news - would chose to ignore the positive trends.  Humphreys, who has been writing about them, recently answered that question. Apparently he got some push-back from prison reform activists for reporting that the glass might actually be half full.


But a small group of people are upset that I have engaged in what might be called “airing clean laundry”. Their argument is that by letting the public know that incarceration rates are going down, I am effectively declaring that mass incarceration is over (even though I have repeatedly said just the opposite) and implicitly encouraging everyone to move on to some other social problem.

The consequentialist argument against sharing good news regarding a longstanding social problem is that it invariably undermines further reform by reducing the public’s sense of urgency. I am not convinced that this hypothesis is correct. Ignoring evidence of positive change can increase despair and thereby reduce the willingness of advocates to keep trying. In contrast, showing evidence of success builds hope and confidence. Further, highlighting the achievements of reformers brings them attention and respect, which can help sustain them in their difficult work.

This is EXACTLY the issue President Obama is addressing when he says that cynicism is a choice - and that hope is a better choice.