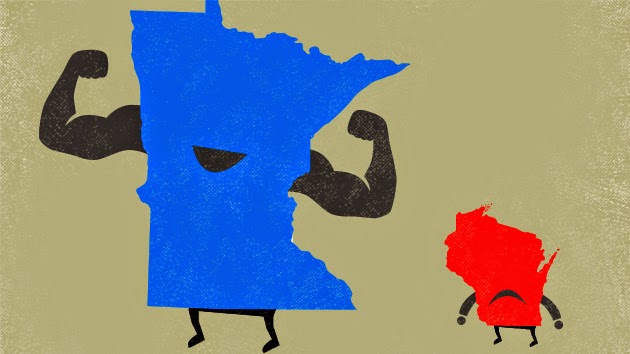 With the Iowa caucus still 11 months away, the media has become obsessed with the candidacy of Scott Walker. Perhaps it's just a coincidence, but in the midst of all that, a few good reporters are taking a look at flyover country and finding out that Wisconsin's next door neighbor provides a great antidote to his policy claims.

Up here in the tundra, that comparison started a while ago. In 2013, the Milwaukee Journal Sentinel published an article reminding us that when it comes to population, commerce and politics, Minnesota and Wisconsin have an awful lot in common. But something drastically changed after the 2010 election.

In their underlying political makeup, they may be as similar as any two states in America.

In a true testament to the idea that "every vote matters," here is a summary of what spurred the different path each state would take:


In Wisconsin, Republicans captured the governor's office (Scott Walker) and both chambers of the Legislature in the GOP wave of 2010. Thanks to that unified control, Republicans were able to pass a hugely favorable redistricting plan that helped ensure the party's legislative majorities in 2012 in an otherwise poor election for the GOP.

In Minnesota, Republicans also took over both chambers of the Legislature in the 2010 conservative wave. But the party fell four-tenths of a percentage point short of winning a three-way race for governor. Democrat Mark Dayton's razor-thin victory with less than 44% of the vote resulted in divided government, which resulted in a fairly neutral, court-approved redistricting plan. And that helped make it possible for Minnesota Democrats to retake the Legislature in the more favorable election climate of 2012.

I mentioned a while ago that Larry Jacobs had suggested in 2013 that this divergence of such similar states could provide a laboratory for measuring the outcomes of liberal and conservative policies. Recently Patrick Caldwell and Carl Gibson seemed to have noticed as well.

Caldwell focused on the fact that - unlike Scott Walker - Gov. Mark Dayton is an "unnatural" politician.


For a man who has won a competitive US Senate race and secured his second term as governor in November, Mark Dayton is a terrible retail politician. "He's very shy and he's an introvert," Ken Martin, the chair of the state party and a friend of Dayton's, told me unprompted earlier this month. "He's not a typical, backslapping politician," Martin continued. "He's not very articulate; he's kind of jerky," Tom Bakk, the Democratic Senate majority leader, says of his ally's style. When Dayton first ran for his current job, in 2010, The New Republic dubbed him "Eeyore for Governor."

Nevertheless, Dayton managed to get the job done.


Think of Dayton as Scott Walker's mirror image. With the help of GOP-controlled legislatures, Walker and other Republican governors, such as Kansas' Sam Brownback, have passed wish lists of conservative policies and touted their states as laboratories that demonstrate the benefits of conservative governance. Walker, the governor of Wisconsin, has parlayed that hype into a potential 2016 presidential run. And across the border in Minnesota, Dayton seized a brief moment of unified Democratic control to create the liberal alternative to Walker's Wisconsin—a blue-state laboratory for demonstrating the potential of liberal policies. Dayton didn't "set out" with the objective of one-upping Walker in mind, he told me after the Eagan event. But "the contrast," he notes, is obvious.

Over the past several years, Minnesota has become a testing ground for a litany of policies Democrats hope to enact nationally: legalizing same-sex marriage, making it easier to vote, boosting primary education spending, instituting all-day kindergarten, expanding unionization, freezing college tuition, increasing the minimum wage, and passing new laws requiring equal pay for women. To pay for it all, Dayton pushed a sharp increase on taxes for the top 2 percent—one of the largest hikes in state history. Republicans went berserk, warning that businesses would flee the state and take jobs with them.

The disaster Dayton's GOP rivals predicted never happened. Two years after the tax hike, Minnesota's economy is booming. The state added 172,000 jobs during Dayton's first four years in office. Its 3.6 percent unemployment rate is among the lowest in the country (Wisconsin's is 5.2 percent), and the Twin Cities have the lowest unemployment rate of any major metropolitan area. Under Dayton, Minnesota has consistently been in the top tier of states for GDP growth. Median incomes are $8,000 higher than the national average. In 2014, Minnesota led the nation in economic confidence, according to Gallup.

I would simply add that recently Gov. Walker announced that Wisconsin will have to skip a $108 million debt payment due to his budget shortfall, while yesterday Minnesota's state budget office announced a projected $1.8 billion surplus (up $832 million since their last projection in November).

Gibson provides some of the same data and then tells us how this happened in Minnesota.


Gov. Dayton didn't accomplish all of these reforms by shrewdly manipulating people -- this article describes Dayton's astonishing lack of charisma and articulateness. He isn't a class warrior driven by a desire to get back at the 1 percent -- Dayton is a billionaire heir to the Target fortune. It wasn't just a majority in the legislature that forced him to do it -- Dayton had to work with a Republican-controlled legislature for his first two years in office. And unlike his Republican neighbor to the east, Gov. Dayton didn't assert his will over an unwilling populace by creating obstacles between the people and the vote -- Dayton actually created an online voter registration system, making it easier than ever for people to register to vote.

The reason Gov. Dayton was able to radically transform Minnesota's economy into one of the best in the nation is simple arithmetic. Raising taxes on those who can afford to pay more will turn a deficit into a surplus. Raising the minimum wage will increase the median income. And in a state where education is a budget priority and economic growth is one of the highest in the nation, it only makes sense that more businesses would stay.

It's official -- trickle-down economics is bunk. Minnesota has proven it once and for all. If you believe otherwise, you are wrong.

So my question for all the media and Republicans who are fawning over Scott Walker is...if he's all that, why is Mark Dayton's Minnesota beating him on every conceivable measure?

Of course the answer is that Dayton has clearly proved that - when all the hype is over - Democratic policies work.
at February 28, 2015