I was mostly raised in East Texas and it's been a long time since I took a history class in school, so I can't remember everything I was taught about the Civil War and Reconstruction. But one thing I can be sure of - up until a few years ago, if we were doing word association and you asked me what came to mind in response to the word "Reconstruction," I would have most likely said "carpetbaggers." And yes, this would definitely be the image in my mind of what that word represents. 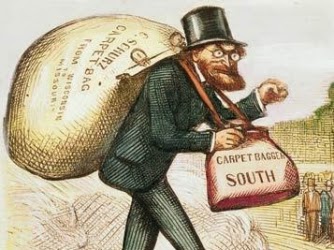 The racist applications were never made explicit, but the message was clear...those "outside agitators" (a term that was popularized during the second reconstruction) came down from Yankee-land to exploit the South for their own financial gain. That's what defined the era of Reconstruction.

And so perhaps you can understand why I read articles like this one from from Elizabeth Varon titled: Lee Surrendered, But His Lieutenants Kept Fighting with a certain fascination. She ends her short history lesson with this from black poet Charles Dinkins:


When fails the sword, the better way
Becomes the soldier’s part to play;
The south will whip the north some day
With ink and pen.

It was that "ink and pen" that wrote the history I was taught about Reconstruction...the history that so subtly kept me ignorant of what ignited the terrorism African Americans were subjected to over the next hundred years in this country.

As I continue to learn from people like Varon, the pieces of the puzzle come together and the picture of what really happened starts to take shape. It is in that process that I also begin to understand the place where we find ourselves today.
at April 09, 2015