Wow - yesterday was such an emotionally powerful day! I remember reading my twitter timeline late in the morning as some folks were struggling with the desire to celebrate the SCOTUS ruling making marriage equality the law of the land - and yet preparing themselves for the home-going service of a minister/public servant who had been gunned down by a white racist. And then came the amazing sermon by our Rev. President Barack Obama. OH MY!!!!!

The juxtaposition of these two long struggles for equality in our country reminded me of another day when the two came face-to-face. On November 4, 2008 this country elected our first African American president. But on that same day, California said "yes" to Proposition 8 - a constitutional amendment banning same-sex marriage. I will never forget what terrance - a black gay man - wrote in response.


It has been a strange couple of weeks. Just last week, I saw something that I never thought I’d see in my lifetime, and felt like I was witnessing it for all my ancestors who didn’t live to see a hope fulfilled. But — with a “twoness of being” that DuBois probably didn’t imagine when he coined the term — it was a deeply conflicted moment.

As a Black man, in that moment I felt like more of an American than I ever had before, like a barrier to full citizenship and belonging had been raised. As a gay man with a husband and a family, however, I ended up feeling like less of an American than I ever had before; divorced from the celebrating and even the historic significance of the moment by a barrier to citizenship and belonging that fell more firmly into place even as another one was lifted.

It was through terrance's words that day that I gained a whole new appreciation of what we mean when we talk about "intersectionality." While a lot of people slice and dice these issues up and ask us to pick sides, the lines that we assume divide us sometimes run through the actual bodies of human beings.

Watching these two movements for equality once again intersect yesterday was a powerful reminder of history teaching us that the struggle is never over and giving up is not an option. Who would have thought that 6 1/2 years after Prop 8, marriage equality would be the law of the land? And while we all knew that the election of Barack Obama didn't mean that this country was finally post-racial, who knew that it would lead to such an explosion of hate?

And so today I'm once again thinking about something Michelle Obama said about her husband - our President - a few years ago.

If we keep showing up, if we keep fighting the good fight and doing what we know is right, then eventually we will get there.

In other words, as long as we continue to show up: 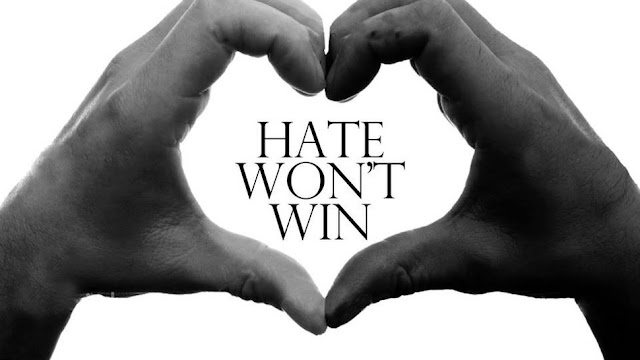