Presidential Candidates Will Need to Listen

The most recent AP-GfK poll found something interesting.


Even as the public remains closely divided about his presidency, Barack Obama is holding on to his support from the so-called "Obama coalition" of minorities, liberals and young Americans, an Associated Press-GfK poll shows, creating an incentive for the next Democratic presidential nominee to stick with him and his policies.

Hillary Rodham Clinton, by comparison, is viewed somewhat less favorably by the key voting groups whose record-setting turnout in 2008 propelled Obama to the White House and will be crucial to her own success.

The findings offer a window into the factors at play as Clinton decides how closely to embrace Obama, his record and his policies in her campaign for president. Although associating herself with Obama could turn off some independent and Republican-leaning voters, electoral math and changing demographics make it critical for Democrats to turn out high numbers of Hispanics, African Americans and young voters.

From the moment Hillary Clinton officially launched her 2016 campaign, it has been clear that she is actively courting "the Obama coalition." She came out of the gate talking about things like criminal justice reform, immigration reform and voting rights - all issues that are of primary concern to people of color, especially young people. Based on reports like this, that is not an accident.


"This is the strongest start when it comes to diversity in presidential politics that I've seen and I've been doing this for over 20 years," says Jamal Simmons, a principal at The Raben Group, a Washington, D.C.-based lobbying firm. "She is hiring Black and Latino department heads and women in important positions. It's aggressive and to be commended."

According to Simmons, it's not only the Democratic thing to do because the party says it values diversity, but it's also important to have people on her staff who come from the same communities as her prospective voters.

"The first thing [such hires] does is show our community that the campaign is concerned about who we are and what our issues are and I think that's very, very important," she said. "It also says to our community that there are people in that campaign with whom we have some genuine ability to talk to and who understand what we're talking about."

To the extent that Hillary listens to the diverse members of her staff, she is unlikely to make the same mistakes that Martin O'Malley and Bernie Sanders did yesterday in response to challenges from people involved in the #BlackLivesMatter movement. They will tell her things like: saying "all lives matter" is "perceived as erasure rather than inclusion" and that tackling the issue of income inequality is a necessary but insufficient way to address structural racism.

Like it or not, this presidential campaign is going to require candidates to deal with the issues that are important to people of color, and white people inherently have blind spots in those areas. It will become increasingly important for candidates to pay heed to the words of the Dalai Lama. 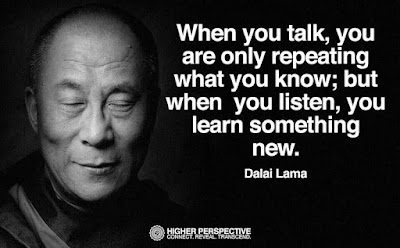