From Wellstone to Weeks: The Uprooted Election in Minnesota's Second Congressional District 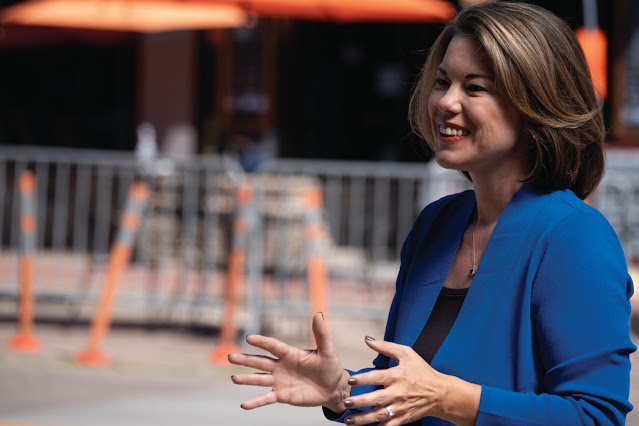 Until last week, no one was paying a lot of attention to the race in Minnesota’s second congressional district. Incumbent Democrat Angie Craig has been running ahead of her Republican challenger, Tyler Kistner, in a suburban district that has mirrored the swing towards Democrats over the last few years. Larry Sabato’s Crystal Ball rates the seat “likely Democrat,” while the Cook Political Report has it “lean Democrat.”

But then Adam Weeks, representing the Legal Marijuana Now Party in the race, died suddenly at the age of 38. The cause of his death is unknown at the moment. But a friend of Weeks, Joey Hudson, told the Star Tribune that he had been worried about the candidate’s health.

He had a bad ski accident the year before and was recovering from addiction, Hudson said, adding that he should not have been out walking miles on the campaign trail.

Weeks had supported Donald Trump for president in 2016 but was also concerned about the major parties, Hudson said. Hudson also said Weeks was wooed to run for office by “hard-core Republican, borderline QAnon-type guys,” and the duplicitous nature of the campaign was also wearing on him.

Lest anyone assume that the Legal Marijuana Now Party would, by definition, be left-wing, Weeks was a Trump supporter who had been talked into running by “borderline QAnon-type guys” on a three-point platform: (1) end the war on drugs, (2) legalize marijuana, and (3) weed out corruption. In other words, his candidacy resembled the attempts by Republicans to get Kanye West on the presidential ballot in some states.

The issue raised by the death of Weeks is that, following the 2018 election results, the Legal Marijuana Now Party met Minnesota’s requirements for being declared a “major party.” That means that a law passed by Democrats following the death of Senator Paul Wellstone has been triggered for the first time.

Wellstone was killed in a plane crash just eleven days before the 2002 election. According to Minnesota law at the time, ballots cast for him prior to his death could not be counted for Walter Mondale, who agreed to step in as the Democratic nominee. Republican Norm Coleman went on to beat Mondale by just over two points.

Demonstrating the pitfalls of legislation via anecdote, Democrats passed a bill in 2013 that would delay an election until February if a candidate from a major party dies within 79 days of an election. In light of that, MN Secretary of State Steve Simon issued a statement on the current situation in the second congressional district, saying that “the law is clear on what happens next. If a major party nominee dies within 79 days of Election Day; a special election will be held for that office on the second Tuesday of February (February 9, 2021).” In the meantime, the seat for the second district will remain open from the end of the lame duck session in December until after the special election in February.

Rep. Craig issued a statement suggesting that “there are still many outstanding questions” and urged voters to “continue to vote for the entire ballot, including for this congressional race.” Those questions stem from the fact that the Minnesota law hasn’t faced legal scrutiny and contradicts a federal statute which requires that House elections be held on “the Tuesday next after the 1st Monday in November.”

If the Minnesota law is upheld, it is unclear if the delay would boost the candidacy of Tyler Kistner, who has been outraised by Craig five to one. Kistner failed to report his fundraising totals last quarter, indicating that he had not raised or spent the $5,000 threshold required to file. For all of their talk about winning in Minnesota, Republicans have been ignoring the suburbs and focusing all of their attention on rural areas where the party is already strong. But all of that could change if this becomes the only contest on everyone’s radar in February.

In a long-shot scenario, this seat could become relevant to the presidential race in the event of an Electoral College tie, where the outcome is decided in the House. If that should happen, each congressional delegation gets one vote, with the current partisan split in Minnesota at 5-3 in favor of Democrats. That becomes a 4-3 advantage if this seat remains open. But there are two other congressional races in Minnesota that are currently rated as toss-ups: one Republican and one Democrat. If both went to Republicans, their delegation would have a 4-3 advantage and Minnesota could go for Trump, regardless of the popular vote in the state.