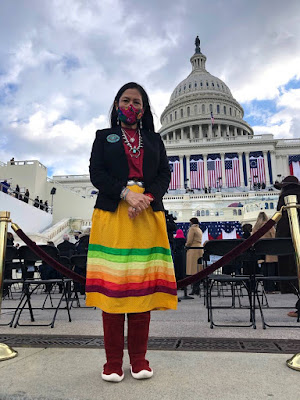 Four of President Biden's Cabinet nominees have been confirmed by the Senate. In not one case was the vote even close. Secretary of State Tony Blinken was confirmed by a vote of 78-22,  Defense Secretary Lloyd Austin  93-2, Director of National Intelligence Avril Haines 84-10, and Treasury Secretary Janet Yellen 84-15.

Those numbers should send a message to any Democrat—including Senators Joe Manchin and Kyrsten Sinema—that there is more potential for bipartisanship when a supermajority is not required for confirmation.

But there are a few nominees who are unlikely to get that kind of bipartisan support. Taking a look at which ones are coming under attack by Republicans tells us a lot about the GOP agenda.

Fox News personality Tucker Carlson was the first one out of the gate to go after Biden's nominee to run the Civil Rights Division at DOJ, Kristen Clarke. Given that the Republican Party has a long history of attacking Democratic nominees to that position, that comes as no surprise. They have never supported the enforcement of civil rights laws, which is the mission of the Civil Rights Division.

Republican senators are attempting to slow down the confirmation of Alejandro Mayorkas as Secretary of the Department of Homeland Security, the first immigrant and Latino to be nominated for that position. According to CNN, the issue with Mayorkas is immigration.

Republican Sen. Josh Hawley of Missouri attempted to block Mayorkas' quick consideration after the hearing, arguing in a statement that Mayorkas had inadequately explained how he will secure the US southern border.
In a letter Tuesday, Cornyn led seven other GOP senators on the Senate Judiciary Committee, including Hawley, in demanding a hearing for Mayorkas before their panel. They argued that Mayorkas spoke about "immigration priorities at length" during his January 19 hearing proving that immigration issues will be a "top focus" of his, and that the Senate Judiciary Committee has jurisdiction over immigration matters.

Finally, several Republicans in the House—led by Rep. Pete Stauber of MN—have written a letter to President Biden asking him to withdraw the nomination of Deb Haaland to be Secretary of the Interior, the first Native American woman ever nominated to a Cabinet-level position.  The representatives couch their objection to Haaland on the grounds that she supports the Green New Deal. But it is clear that the central issue is her opposition to the leasing of federal lands to the extraction industry—something that disproportionately affects Native American tribes.

Since Republicans aren't likely to have the votes to stop the confirmation of these nominees, one has to wonder why they would spend time on these objections. The answer is that, not only does it provide them with the opportunity to attack a Black woman, a Latino man, and a Native American woman, it allows them to rile up their base with issues that inflame their nativist instincts. That has been the GOP agenda for years now. The attacks on Clarke, Mayorkas, and Haaland are just the latest examples.