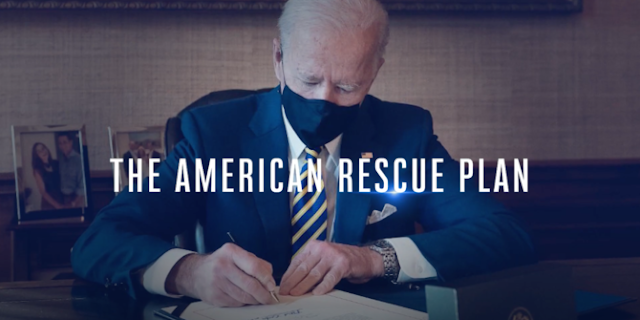 President Biden is right. The negotiations over Obamacare went on too long. But as someone who followed all of that very closely, it was frustrating to watch liberals act as if the only important item in the whole package was the public option. There were even groups that organized around defeating the entire bill once it became clear that there weren't enough Democratic votes to pass the ACA if the public option was included. Totally ignored by those folks were things like Medicaid expansion, guarantees for people with pre-existing condition, federal subsidies, and the medical loss ratio.

As Democrats prepare to pass a COVID relief bill via budget reconciliation, I'm feeling a bit of deja vu. This time, the obsession is all about who will receive the direct cash payment of $1,400. The initial proposal was for them to go to individuals who made less than $75,000 and couples making less than $150,000. Apparently Senator Joe Manchin wants to limit them to individuals making less than $50,000 and couples making less than $100,000. Right now, that conflict is sucking all the air out of the conversation—meaning that for low information voters, that is the only provision they're hearing about.

Last week, two Florida mayors wrote an op-ed titled, "We mayors—a Democrat in St. Petersburg and a Republican in Miami—need President Biden's American Rescue Plan to save our communities." They did a good job of going beyond the $1,400 checks in order to make it clear how important this legislation is to everyone (emphasis mine).

First and foremost, the American Rescue Plan would help us get our population vaccinated more quickly. The only way we’re ever going to really be able to pull ourselves out of this hole is by vaccinating the vast majority of the population...

Second, the plan will finish the job of getting $2,000 checks into the hands of Floridians, providing immediate economic relief to families struggling just to put food on the table and keep the lights on...

And for Floridians facing the most economic pain — those who are without a paycheck — the American Rescue Plan will extend federal unemployment benefits for millions of Americans. The plan also addresses other areas of daily life in Florida that are in crisis: It provides rental assistance to renters falling behind, creates access to affordable childcare, and gets additional emergency food and nutrition assistance to the millions of Floridians currently facing hunger.

Finally, the president’s American Rescue Plan would provide the needed funding for states and cities — like St. Petersburg and Miami — that we need just to be able to keep our police officers, firefighters, and other first responders on payroll.

There’s so much more to Biden’s plan — like getting flexible grants to Florida’s small businesses, re-opening schools, and making child care affordable during this crisis — that will help pull us out of this disaster.

Most of that gets lost when all anyone talks about are the limits for the direct-payment checks.

Perhaps even more important are the proposals that could have a major impact on child poverty. Even before the pandemic, nearly 11 million children in this country — about 1 in 7 — were living in poverty. That ranks as one of the highest rates of child poverty in the developed world.

David Wessel from Brookings explained what Biden has proposed as part of the America Rescue Plan and the impact it would have.

The Center on Budget and Policy Priorities estimates that the Biden proposal would benefit 27 million children (roughly half of all Black and Latino children) whose families don’t get the full credit now because they don’t have enough income – including nearly 10 million who are currently below the poverty line. And the Center on Poverty and Social Policy at Columbia University says this would reduce the poverty rate among children under 18 from 13.6% to 7.5%.

As the Washington Post recently reported, the White House called for an extension of the Child Tax Credit, but left it up to congressional Democrats to hammer out the details. Rep. Richard Neal (D-Mass), who chairs the House Ways and Means Committee, has released a bill outlining the plan.

The IRS would begin sending out payments July 1 in a similar fashion to how it sent out the stimulus payments, directly depositing the payments in taxpayers’ bank accounts...The benefits will also be delivered monthly in an attempt to help poorer parents facing fluctuations of income.

All of this is still in process. But whether we're talking about an extension of unemployment benefits, money to keep state and local governments afloat, or lifting millions of children out of poverty, there is a lot more to the American Rescue Plan than where the income cap is placed for direct-payment checks of $1,400. It is important that the American public be aware of everything that's on the table.

Update: Since I mentioned Obamacare, here's something else Democrats want to include in the American Rescue Plan: