Why Black History Month Is Important for White People 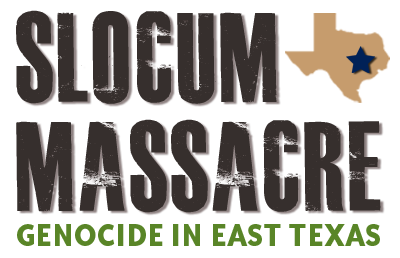 It is only recently that I learned about the 1910 massacre in Slocum, Texas—which happened less that 100 miles from the place I was born.

“Men were going about killing Negroes as fast as they could find them, and, so far as I was able to ascertain, without any real cause,” then-Anderson County Sheriff William Black told The New York Times in 1910. “I don’t know how many there were in the mob, but there may have been 200 or 300. Some of them cut telephone wires. They hunted the Negroes down like sheep.”...

The massacre went on into the next day, and official reports named eight victims of the incident, including Larkin and Holley, though law enforcement suspected more had been killed, their bodies said to be buried in an unmarked mass grave somewhere in Slocum...

The grand jury indicted seven men with 22 counts of murder, but the case didn’t make it far after it was transferred to Harris County, where it was ignored. And that’s how the Slocum Massacre has been treated over the course of more than a hundred years—as an unspoken and largely forgotten part of the town’s history.

Telling those "unspoken" stories is what makes Black History Month so important.

But comedian Amber Ruffin had a unique response to the people who complain about a month dedicated to Black history by asking why we don't have a white history month. She said: "bring it on."

In our new segment, "How Did We Get Here," we demand a white history month! pic.twitter.com/YNX9QDdphw

To apply Ruffin's suggestion to the Slocum massacre is to recognize that it is also white history. As Sheriff Black reported at the time,  200 to 300 white people went on a killing spree, hunting "Negroes down like sheep."

For those of us who are white, that is the more difficult part of this history to grapple with, because it's OUR history. The truth is that grieving the loss of Black lives is more palatable than reckoning with the fact that it was our people who did the killing.

One of the ways we hide from that truth is by inserting "white saviors" into the stories about the struggle for civil rights in this country. That was the basis for the critique of the book and movie "The Help." The heroine, "Skeeter" Phelan, is a white woman, who provides all of us with the ability to identify with her, rather than the majority of white women who degraded and abused their Black maids.

The result of not acknowledging this white history is that it keeps repeating itself, as Aaron Morrison noted in an article titled, "A race war evident long before the Capitol siege."

Today’s battles in the race war are waged by legions of white people in the thrall of stereotypes, lies and conspiracy theories that don’t just exist for recluses on some dark corner of the internet.

People like the murderer who fatally shot nine Black parishioners at a church in South Carolina, telling detectives that Black people were taking over the country and raping white women. And the shooter who killed 23 and wounded 23 others at a Walmart in El Paso, Texas — targeting Mexicans, authorities say, because he believed they were invading the country to vote for Democrats.

And the riotous mob, rife with white supremacists, that bought in when Trump and others insisted falsely that the presidential election was stolen, mostly in areas where people of color live and vote.

For a very long time, civil rights leaders, historians and experts on extremism say, many white Americans and elected leaders have failed to acknowledge that this war of white aggression was real, even as the bodies of innocent people piled up.

When we avoid acknowledging that white supremacy is our history because it makes us feel guilty and ashamed, we also avoid taking responsibility for addressing the problem.

Even though I grew up less than 100 miles from where the Slocum massacre took place, I never heard a peep about it until I was in my so-called "golden years." But learning about it informs me about my own history and why white people took such pains to keep it a secret. In other words, it's part of my race story. That is precisely why Black History Month is so important for white people.
at February 14, 2021