Senator Collins' Game Has Been Exposed 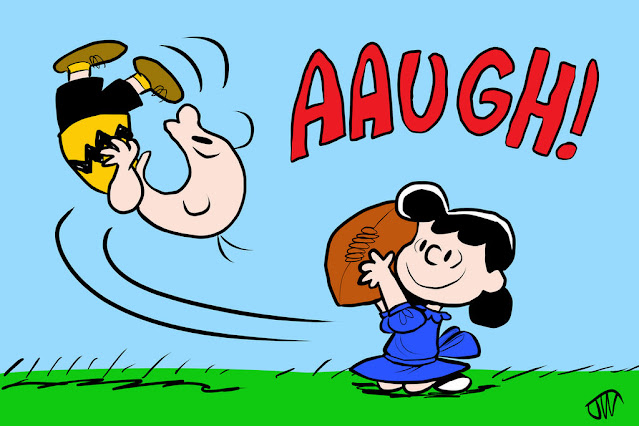 Nothing captures the politics of Sen. Susan Collins better than the cartoon about Lucy pulling the football as Charlie Brown goes to kick it.  She likes to tout herself as a "moderate" in search of bipartisanship. But after furrowing her brow in concern, she invariably votes the way Republican Minority Leader McConnell wants.

So it comes as no surprise that a publication like Politico is warning about the danger Democrats risk in refusing to be sucked into her games.

For weeks Collins has questioned Schumer’s handling of coronavirus relief negotiations, and on Tuesday night Schumer fired back to blame Collins’ fiscal conservatism for exacerbating the last financial crisis. The New York Democrat said in a nationally televised interview that his party’s courtship of three GOP votes for its Obama-era stimulus bill shrunk the legislation too much: “We made a big mistake in 2009 and ’10. Susan Collins was part of that mistake.”

Collins was not pleased to be singled out in such a manner. In an interview, she called Schumer’s comments an “extraordinary” backhanding of his most natural ally across the aisle. And she said there’s been zero contact with the Democratic leader since the election: “He has not spoken to me, no.”

“Why Chuck seems to be going out of his way to alienate the most bipartisan member of the Senate is a mystery to me,” Collins said.

In other words, Collins wants us to believe that this time, she wanted to hold the football up for Charlie Brown to kick. Calling her out on that fabrication is "extraordinary backhanding." But before the Senate passed the coronavirus relief package, Collins said something that caught my eye.

"I don't understand how the WH can describe a bill that passed the House without a single Republican vote as being bipartisan. What was bipartisan was the opposition."

It is the last sentence that gives away her game. In his book The New New Deal, Michael Grunwald documented the 2009 Republican plan for total obstruction. As he reported, the talking point they wanted to use was: "The only thing bipartisan was the opposition." The plan was to obstruct everything Democrats attempted to do and then blame them for failing to be bipartisan. In reviving the 2009 talking point, Collins demonstrated her alignment with the current iteration of total obstruction.

It is safe to assume that if Majority Leader Chuck Schumer had bothered to consult with Collins, she would have attempted to nullify the impact of the legislation, and/or simply pulled the football once again and voted against it in the end.

According to a recent poll by Pew Research, that little game doesn't seem to be working as well this time around. 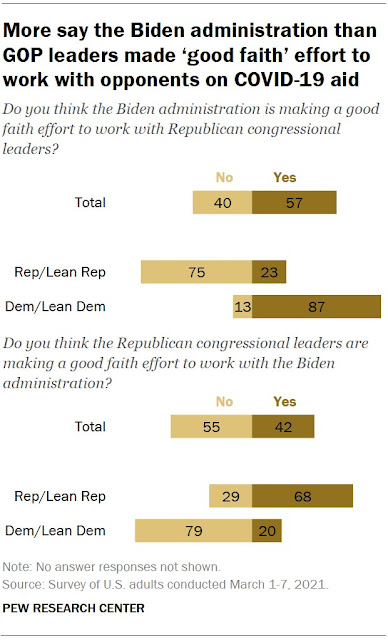 While the partisan results are skewed, a total of 57 percent of Americans believe that Biden made a good faith effort to work with Republicans on the coronavirus relief bill.

So Senator Collins can cry all of her crocodile tears about Schumer's unwillingness to play her game. But she's the one that pulled the football over and over again. In reviving the 2009 talking point, she made it clear that she's still up to her old tricks.