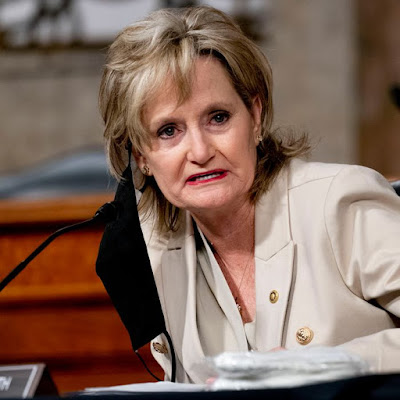 White evangelical Christians have a long history in this country of using the Bible to defend their racism and sexism. So it should come as no surprise that during Wednesday's hearing on the For the People Act, which would protect and expand voting rights, Senator Cindy Hyde-Smith (R-MS) used the Bible to defend Republican voter suppression in Georgia.

Nevermind that Hyde-Smith was lecturing a Jewish senator about how to observe the Sabbath as outlined in Hebrew scripture. She pulled up a passage from the Old Testament book of Exodus saying, "Remember the Sabbath and keep it holy." What she failed to mention is that the law being considered in Georgia is specifically designed to end the "Souls to the Polls" movement in which African American Christians exercise their right to vote after attending church services on Sunday. Senator Hyde-Smith takes it upon herself to judge that effort as unbiblical.

If the senator from Mississippi thinks it's appropriate to base U.S. laws on how she interprets the Bible, I would suggest that she take a look at a passage from the New Testament where Jesus clarifies the meaning of the Sabbath. Here's Mark 2:23-27 (emphasis mine).

One Sabbath Jesus was going through the grain fields, and as his disciples walked along, they began to pick some heads of grain. The Pharisees said to him, “Look, why are they doing what is unlawful on the Sabbath?”

He answered, “Have you never read what David did when he and his companions were hungry and in need? In the days of Abiathar the high priest, he entered the house of God and ate the consecrated bread, which is lawful only for priests to eat. And he also gave some to his companions.”

Then he said to them, “The Sabbath was made for man, not man for the Sabbath."

In context, what Jesus was saying is that observing the Sabbath was intended to remind people to take a day of rest. The Pharisees had turned it into a whole series of rules based on what one can/cannot do on the Sabbath.

I grew up mostly in the south and was always a bit confused about the rules that governed what we were not allowed to do on Sunday (the Christian Sabbath). While it was hailed as a day of rest, I noticed that it was the opposite for my mother. Her tasks that day included getting Sunday dinner in the oven while overseeing four children get dressed for church. After services, she got the meal on the table and then cleaned up the kitchen. Her "rest" didn't start until about mid-afternoon.

The other confusing rule, given that water sports were our family's form of recreation, was that we were not allowed to swim or go water skiing on Sunday. But we could go for a boat ride. Somehow observation of the Sabbath meant that we couldn't be in the water, but we could ride on top of it.

Those are the kinds of things that happen when humans take an ancient guideline and turn it into rules to govern the activities we engage in today. In other words, it's what happens when we believe that man was made for the Sabbath. In the process, we forget that the whole idea was to remind us to rest at least one day a week.

But let's be honest. None of that addresses what Senator Hyde-Smith wants to promote with her twisting of scripture. She had to dig deep to find a justification in the Bible for suppressing the votes of African Americans. If not the Sabbath, she would have found something else.