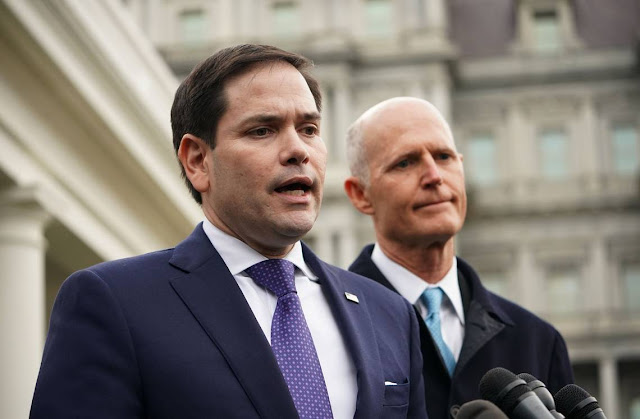 The number one goal of Republicans in the 2022 elections is to win back control of the Senate. The man who is in charge of that task is Sen. Rick Scott, who is currently chair of the National Republican Senatorial Committee.

Given that the GOP has broadcast that their strategy for accomplishing that goal is voter suppression, Scott is in an unenviable position. Corporations that are headquartered in states like Georgia and Texas, which are at the forefront of voter suppression, have spoken out against those efforts. So the Republican Party has all of the sudden declared war on corporate American.

To further that claim, Scott wrote an op-ed for Fox News. The title of the piece addresses "Woke Corporate America," claiming that a backlash is coming. But the tag line is beyond irony. It reads: "It turns out that power does corrupt, and you have become corrupt." The senator from Florida doesn't want you to remember this:

In the 1990s, Scott was the CEO of Columbia/HCA, a company that, under his direction, owned more than 340 hospitals, 135 surgery centers, and 550 home-health locations by the time Scott resigned in 1997. That year, federal agents announced an investigation into whether or not the company defrauded Medicare and Medicaid on a massive scale. Turns out, they did...

As part of the settlement, Columbia/HCA agreed to plead guilty to 14 corporate felonies — charges that involve financial penalties, but no jail time. (Corporations are people, but they cannot be sent to prison.) Over two settlement rounds, Columbia/HCA wound up paying the government $1.7 billion in criminal fines, civil damages, and penalties, in what the Justice Department called “the largest health-care fraud case in U.S. history.”

In other words, Scott is the poster-child for how power corrupts. And yet, he now has the gall to suggest that corporate America is corrupt for speaking out against voter suppression. Here's my reaction to that: 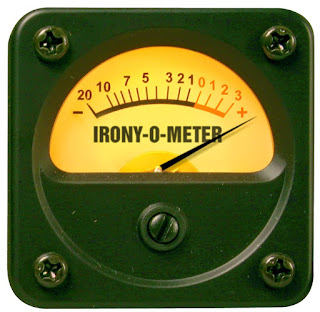 Similarly, Sen. Marco Rubio wrote an op-ed for the New York Post titled, "Corporations that undermine American values don’t deserve GOP support." At least he was closer to being honest in admitting that Republicans have favored corporations by giving them tax breaks and deregulation. But according to Rubio, those came in the days when corporate America was patriotic. Now he claims that the "greatest threat" they pose comes from their "aggressive positions on woke cultural issues that tear at our national fabric." Rubio concludes with a bizarre analogy, combined with a threat.

No policymaker would allow a company to dump toxic waste into a river upstream of a thriving town he is charged with governing. Yet corporate America eagerly dumps woke, toxic nonsense into our culture, and it’s only gotten more destructive with time. These campaigns will be met with the same strength that any other polluter should expect...America’s laws should keep our nation’s corporations firmly ordered to our national common good.

Sorry Senator Rubio, but just because people disagree with you doesn't make them "toxic." There's also this thing in our Constitution about "free speech." The 1st Amendment prohibits Congress from making any law "abridging the freedom of speech." I suspect that if congress were to order corporations to align with Rubio's vision of "our national common good," that would be a direct violation of the 1st Amendment, as well as an actual example of "cancel culture."

I have to admit to a certain amount of pleasure in watching Republican Minority Leader McConnell backtrack from his admonition to corporate CEOs that they should "stay out of politics." He's obviously fine with taking corporate money, but doesn't want them taking a stand on issues (meaning, of course, those that are at odds with the Republican Party).

When a party is willing to abandon democracy in order to sustain a lie, this is what happens. Anyone who rejects the lie must be labelled an enemy to the cause. While these attacks on corporate America are mostly posturing, they are aimed at convincing white working class Americans that the GOP is on their side. That, too, is a lie, as Paul Waldman pointed out.

After all, why bother trying to cram genuinely pro-worker economic ideas about wages or working conditions or health care into your pro-corporate box if you can just shout about Dr. Seuss and the War on Christmas? It works in keeping white working class voters choosing Republicans — not every time, but often enough.

That’s what produces things like the GOP’s current campaign of one-at-a-time retribution against corporations. It doesn’t get to any real issues; all it does is lash out when the culture war makes a company seem too aligned with liberal goals and values.

As has been clear for a while now, Republicans don't actually have an agenda. Former Republican Stuart Steven said it best during an interview with David Corn.

Speaking of drug gangs, the Republicans have become Slim Charles from The Wire, who counseled that, "Fact is, we went to war. And now there ain't no going back...If its a lie, then we fight on that lie."