The Discussion About Collusion is a Distraction. We Need to Know if Trump Was a Russian Asset 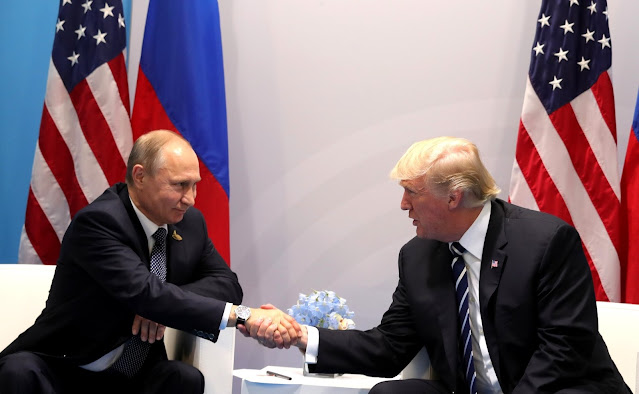 Thanks to a disinformation campaign by former Attorney General William Barr, the biggest Trump lie embraced by mainstream media was the one about how special counsel Robert Mueller found no collusion between the Trump campaign and the Russian government. Mueller's report was clear. He documented massive collusion. In case you have forgotten, Rep. Adam Schiff broke it down.

As Schiff noted, Mueller was not able to document proof of a criminal conspiracy between the Trump campaign and the Russian government.
That is the context for news from the Treasury Department that the Trump campaign's data Paul Manafort turned over to Russian agent Konstantin Kilimnick was passed on to Russian intelligence. At best, it only deepens the story of collusion.
What we still don't know is whether the 45th president of the United States was acting as a Russian asset. That is because the Trump administration effectively shut down a counterintelligence investigation into the matter. Here is what Schiff told Philip Bump a few weeks after Mueller released his report.

Schiff told Bump that once FBI Director James Comey was fired in May 2017, intelligence briefings on this matter ended and he had not been able to determine if the counterintelligence investigation had been closed. Apparently it had, which is what Michael Schmidt reported in the New York Times.

The Justice Department secretly took steps in 2017 to narrow the investigation into Russian election interference and any links to the Trump campaign, according to former law enforcement officials, keeping investigators from completing an examination of President Trump’s decades-long personal and business ties to Russia…

[L]aw enforcement officials never fully investigated Mr. Trump’s own relationship with Russia, even though some career F.B.I. counterintelligence investigators thought his ties posed such a national security threat that they took the extraordinary step of opening an inquiry into them. Within days, the former deputy attorney general Rod J. Rosenstein curtailed the investigation without telling the bureau, all but ensuring it would go nowhere.

Former FBI Deputy Director Andrew McCabe said that Rosenstein led him to believe that such a counterintelligence investigation would be handled by Mueller. But sources told Schmidt that “privately, Mr. Rosenstein instructed Mr. Mueller to conduct only a criminal investigation into whether anyone broke the law in connection with Russia’s 2016 election interference.” So when Mueller appeared before congress, he told them that a counterintelligence probe would be under the purview of the FBI.
This is why the whole discussion about whether the Trump campaign "colluded" with Russia is perhaps the most successful distraction ever concocted by right wingers. The case for collusion has been made beyond any reasonable doubt. Simon Rosenberg, founder of the New Democratic Network, identified the question that remains almost a year ago.

NDN believes that when it comes to Russia, the President has been committing treason or its philosophical equivalent since the infamous Trump Tower meeting in June of 2016. However the illicit bonds were formed, the US has become aligned with Putin, acting as a global partner and ally in advancing his dark agenda, here and abroad...There are many messes which will have to be cleaned up from this terrible chapter in our history – but Trump’s appeasement and embrace of Putin may be among the important and consequential for the world and the future of our once inspiring republic.

If, in fact, Trump was acting as a Russian asset during his presidency, that might qualify as the biggest scandal in U.S. history. There is more than adequate information pointing in that direction. We deserve some answers.