Trump Supporters Are Driven by Status Anxiety. How Should Democrats Respond? 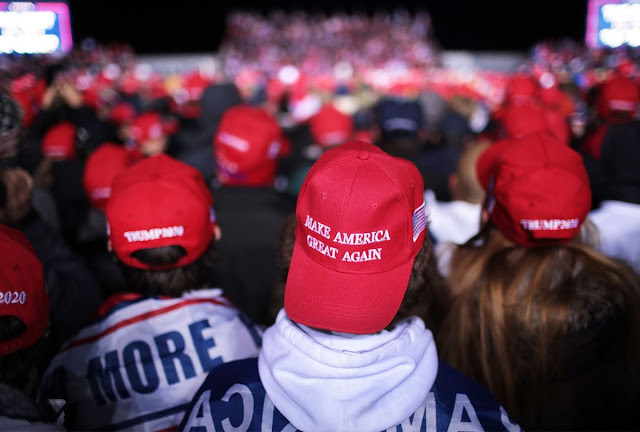 Ever since Donald Trump was elected in 2016, a debate has raged about whether his white working class supporters are motivated by racism or economic anxiety. That debate has persisted, even after the Public Policy Research Institute found that:

Here is what Emma Green concluded after reviewing that research.

Besides partisan affiliation, it was cultural anxiety—feeling like a stranger in America, supporting the deportation of immigrants, and hesitating about educational investment—that best predicted support for Trump.

Buttressing that conclusion is research recently released by Robert A. Pape, a professor of political science at the University of Chicago and director of the Chicago Project on Security and Threats. He analyzed the 377 insurgents who have been arrested for storming the Capitol on January 6th.

[T]he study would appear to connect Jan. 6 not only to the once-fringe right-wing theory called the Great Replacement, which holds that minorities and immigrants are seeking to take over the country, but also to events like the far-right rally in Charlottesville, Va., in 2017 where crowds of white men marched with torches chanting, “Jews will not replace us!”

“If you look back in history, there has always been a series of far-right extremist movements responding to new waves of immigration to the United States or to movements for civil rights by minority groups,” Mr. Pape said. “You see a common pattern in the Capitol insurrectionists. They are mainly middle-class to upper-middle-class whites who are worried that, as social changes occur around them, they will see a decline in their status in the future.”

Based on all of that, it is clear that what motivates Trump supporters isn't necessarily captured by terms like "economic anxiety" or simply "racism." What we should be talking about is their "status anxiety."

Back in December, Thomas Edsall unpacked what that terms means by talking to a lot of experts about it. He learned that it is a subjective perception that is tied to a person’s sense of identity. As such, it represents how individuals gauge their status based on the cultural hierarchies we’ve constructed around things like class, gender, race, religion, geography, education, etc.

Some of the experts Edsall consulted for his piece pointed out that the loss of social status is not something Trump supporters actually experience. It’s something they fear. For example, here is how Peter Hall, a professor of government at Harvard, described those who are affected:

The people most often drawn to the appeals of right-wing populist politicians, such as Trump, tend to be those who sit several rungs up the socioeconomic ladder in terms of their income or occupation. My conjecture is that it is people in this kind of social position who are most susceptible to what Barbara Ehrenreich called a “fear of falling” — namely, anxiety, in the face of an economic or cultural shock, that they might fall further down the social ladder,” a phenomenon often described as “last place aversion."

The reason why it is important to be clear about all of this is that our understanding of what motivates Trump supporters becomes the basis of whether a political agenda can appeal to them. Those who assume that Trump supporters are driven by economic anxiety make the case that if Democrats embrace policy proposals aimed at addressing the economic concerns of white working class voters, they can win their votes. But if Trump supporters are primarily driven by racism, they are simply deplorable and can't be reached.

But what about status anxiety? Is there a political agenda that can address that? No. The truth is that what these folks are experiencing is actually more psychological than political. Their identities have been built on a foundation of supremacy—which is on a collision course with change. The anxiety they are experiencing is not related to what is actually happening, but what they fear might happen. In that sense, white supremacists Richard Spencer was actually the first one to identify Trump's appeal during an interview with Evan Osnos in 2015 (emphasis mine).

He said, “I don’t think Trump is a white nationalist,” but he did believe that Trump reflected “an unconscious vision that white people have – that their grandchildren might be a hated minority in their own country. I think that scares us. They probably aren’t able to articulate it. I think it’s there. I think that, to a great degree, explains the Trump phenomenon.”

That same anxiety about what might happen is what drives men who fear being emasculated by women and Christian nationalists who fear religious persecution. A simple thing like hearing someone speak Spanish at the grocery store triggers white supremacist fears that their entire culture is in the process of being annihilated.

Of course, right wing politicians and media play on those fears every day. They fan the flames in order to maintain power and influence. As long as that continues, it is difficult to imagine how status anxiety can be allayed. That's why there aren't any grand solutions on the horizon.

What Democrats shouldn't do is allow this drama to influence their policy decisions. As the Biden administration is doing, they must analyze real-world problems and propose pragmatic policies to address them. That includes everything from stimulating the economy via infrastructure to immigration reform.  Someone needs to be the adult in the room while these folks throw their tantrums about imagined fears.