Just Prior to His Resignation, Barr Signaled Where the Durham Investigation Is Headed 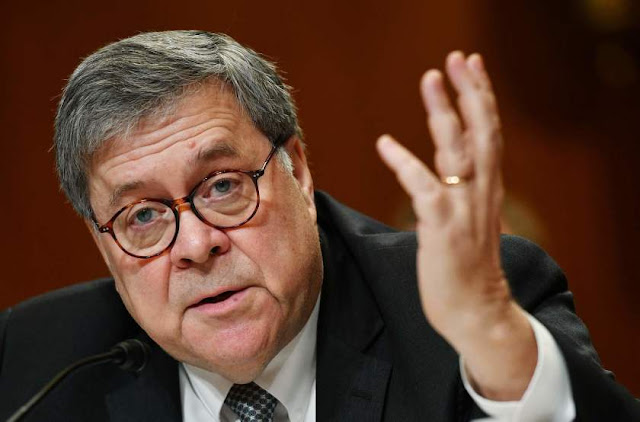 Since special prosecutor John Durham's indictment of Michael Sussmann, there has been a bit of chatter about why he would bring such a weak case. As I noted previously, Sussmann is being charged with lying to the FBI about who his client was when he shared information about a possible connection between Russia and the Trump campaign. But the only witness is the person he met with, FBI General Counsel Peter Baker, who told congress that he didn't remember who Sussmann identified as his client. So this is a case that will never hold up in court.

Nevertheless, Durham's indictment is 27 pages long, mostly documenting communication between the researchers who uncovered the cyber connection. All of the quotes he used suggest that the people involved had doubts about its credibility. None of that is in any way related to the alleged crime of Sussmann's lie. Nevertheless, Durham has now issued additional subpoenas to the law firm Sussmann worked for, Perkins Coie.

Since the indictment became public, both CNN and the New York Times have received documents from the researchers that provide context for the communication Durham cited. With that, it has become clear that Durham cherry-picked the portions he included. As an example, here's what the NYT reported about David Dagon - a Georgia Institute of Technology data scientist and one of the researchers referred to in the indictment.

The indictment also suggests Mr. Dagon’s support for the paper’s hypothesis was qualified, describing his email response as “acknowledging that questions remained, but stating, in substance and in part, that the paper should be shared with government officials.”

The text of that email shows Mr. Dagon was forcefully supportive. He proposed editing the paper to declare as “fact” that it was clear “that there are hidden communications between Trump and Alfa Bank,” and said he believed the findings met the probable cause standard to open a criminal investigation.

“Hopefully the intended audience are officials with subpoena powers, who can investigate the purpose” of the apparent Alfa Bank connection, Mr. Dagon wrote.

Regardless of what these emails demonstrate, Durham is supposed to be conducting a criminal investigation, but none of this indicates an actual crime. So what is the purpose of all of this? To answer that question, it might be helpful to remember how this whole investigation has developed over time.

Former Attorney General Bill Barr made no secret of the fact that he never trusted the origins of the Trump-Russia investigation - even going so far as to suggest that the Obama administration spied on the Trump campaign. So in May 2019, Barr tasked John Durham with investigating the origins of the probe. By October, it had transitioned into a criminal probe. In December 2021, Barr announced that he had bestowed special counsel status on Durham, ensuring that the investigation would continue once Biden became president. Here is how Charlie Savage described Barr's memo that made Durham a special prosecutor.

Mr. Barr’s memo was broadly written and vague. It did not identify any suspected crime that could serve as a predicate for a continuing criminal investigation, or any particular person whom Mr. Durham was to focus on. Nor did it claim a foreign threat that would constitute any separate counterintelligence basis for an inquiry, as with the Trump-Russia investigation.

Mr. Barr also directed Mr. Durham to write a report detailing his findings that would be intended for public consumption...The special counsel regulations do not envision such a report.

No crime or person was identified, but Durham is required to produce "a report detailing his findings." Keep that in mind as we look at how things developed.

At the outset of the investigation, Barr and Durham travelled to several countries that are our closest allies in order to investigate claims that the CIA fabricated the “Russian hoax.” It was clear that Obama's CIA Director John Brennan was at the center of Durham’s investigation. That was a conspiracy theory that was being peddled by a lot of right wingers.

But as he was leaving the Trump administration, Barr dropped a bit of a bombshell on those conspiracy theories during an interview with WSJ opinion columnist Kimberley Strassell. Barr told her that he didn’t “see any sign of improper CIA activity” or “foreign government activity before July 2016. The CIA stayed in its lane.”

Barr also told Strassell something that probably goes a long way towards explaining what Durham is up to these days.

The attorney general also hopes people remember that orange jumpsuits aren’t the only measure of misconduct. It frustrates him that the political class these days frequently plays “the criminal card,” obsessively focused on “who is going to jail, who is getting indicted.”…One danger of the focus on criminal charges is that it ends up excusing a vast range of contemptible or abusive behavior that doesn’t reach the bar.

What Barr signaled was that not only had Durham cleared Brennan and the CIA, he hadn't uncovered any criminal activity on the part of the FBI other than the one incident found by Inspector General Horowitz. But Durham will write a report that, much like the 27-page Sussmann indictment, will cherry-pick information to build a case of "misconduct" on the part of the Clinton campaign and the DNC.

Barbara McQuade thinks that the point of the Durham investigation is "to disseminate what he has found to the public so that Trump and his allies can paint a false equivalence between the conduct of the Trump and Clinton campaigns."

But I think it will go beyond that. Right wing media will run with Durham's report and claim that the entire Trump-Russia investigation was a hoax dreamed up by Trump's opponent. Information will eventually surface to discredit Durham's conclusions, but that won't matter to those who live in an epistemic bubble of lies and disinformation. As we saw with how he handled the Mueller report, William Barr is a master of propaganda. Durham has now demonstrated that he's a willing partner in the former attorney general's schemes.