The "radical" past of AG Eric Holder

To be honest, there's not much news that caught my eye today. The presidential race is in a holding pattern waiting for the first debate this week.

So I thought I'd share with you another one of those articles I found interesting from reading the wingnut sites. As you may be aware, The Daily Caller has focused like a laser beam over the last couple of years on trying to take down Attorney General Eric Holder. Most of these efforts have centered on the Mexican gun-walking controversy called Fast and Furious. But since the Justice Department's Inspector General released its report on the program basically absolving Holder of knowledge or involvement in the program, I guess the wingers are having to look elsewhere to see if they can find some mud to sling around. 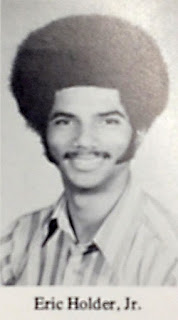 So today they went back to 1970 when Eric Holder was a sophomore at Columbia University. They found that he was a member of a group called the Student Afro-American Society (SAAS) on campus that held a sit-in in an abandoned ROTC facility demanding that it be made into the "Malcolm X Lounge."

Apparently during a 2010 commencement speech at Columbia University's law school, Holder said "[S]everal of us took one of our concerns — that black students needed a designated space to gather on campus — to the Dean [of Freshmen]’office. This being Columbia, we proceeded to occupy that office.”

The article goes on to discuss how SAAS was sympathetic to the Black Panthers and protested the arrest of 21 of their members in 1970.

Of course this all happened 40 years ago and Eric Holder was then a young college student during a time of heightened cultural chaos. But its all meant to scare white people about the angry black radical that now inhabits the top law enforcement position in the United States.

What's even more interesting to me is that this might likely come as even more of a shock to Eric Holder's critics on the left. You know, those people that insist he's simply a sold-out corporate shill for Wall Street and the Military Industrial Complex. What do you suppose they would have to say about our Attorney General's sympathies for Malcolm X and the legal rights of Black Panthers?

It just goes to show that people are much more complex than the simplified caricatures that are often created about them by their opponents - on both the left and right. I suspect that the truth is that Eric Holder - like most of us - has matured a bit in the last 40 years. But I'm glad to know that when he was young and passionate he joined the fray and took a stand for black empowerment.

Oh, and that afro hair with sideburns...you just gotta love that look from the early 70's :-)
Posted by Nancy LeTourneau