Raising up the next generation of leaders

I didn't have time this week to comment on Massachusetts Gov. Deval Patrick picking Mo Cowan to fill John Kerry's Senate seat until the special election in June. But I'm guessing that it will turn out to be a brilliant move.

Sure, I had previously agreed with folks who were looking forward to a Senator Barney Frank. But the truth is - he's at the end of his political career. Being the first African American to represent Representing MA in the United States Senate will give Mo Cowan recognition on the national stage and could launch a future political career.

I suspect that is exactly what President Obama is doing with his visit to Minneapolis on Monday to talk with local officials about innovative approaches to reducing gun violence. RT Rybak is someone with tremendous potential and he's recently announced that he won't be running for another mayoral term. So what's next? 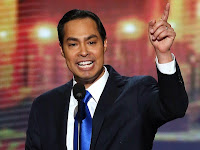 Of course President Obama did the same thing for San Antonio Mayor Julian Castro by inviting him to give the keynote address at the 2012 Democratic Convention (much as Kerry had given Obama that same platform which launched his national political career).

I wouldn't suggest that any of these guys are likely to run for president in 2016 (although you never know). But with the addition of a few women to the list - this is the face of the future of the Democratic Party.

There's a reason why that is important. We need leadership that understands the new challenges we are facing today. No one I've read has described that any better than David Simon.


America will soon belong to the men and women — white and black and Latino and Asian, Christian and Jew and Muslim and atheist, gay and straight — who can walk into a room and accept with real comfort the sensation that they are in a world of certain difference, that there are no real majorities, only pluralities and coalitions. The America in which it was otherwise is dying, thank god, and those who relied on entitlement and division to command power will either be obliged to accept the changes, or retreat to the gated communities from which they wish to wax nostalgic and brood on political irrelevance.

You want to lead in America? Find a way to be entirely utilitarian — to address the most problems on behalf of the most possible citizens. That works. That matters...