Having a wise Latina on the Supreme Court matters 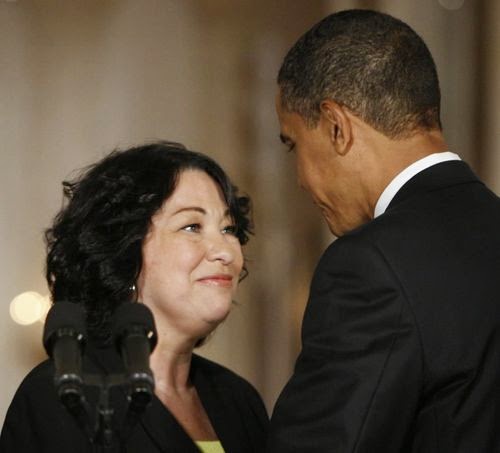 We all saw what happened when President Obama said, "If I had a son, he'd look like Trayvon." No other American president could have uttered those words. I was reminded of that when I saw this part of Justice Sonia Sotomayor's dissenting opinion on the recent Supreme Court decision about Michigan's affirmative action program.


Race matters to a young man’s view of society when he spends his teenage years watching others tense up as he passes, no matter the neighborhood where he grows up. Race matters to a young woman’s sense of self when she states her hometown, and then is pressed, “No, where are you really from,” regardless of how many generations her family has been in the country. Race matters to a young person addressed by a stranger in a foreign language, which he does not understand because only English was spoken at home. Race matters because of the slights, the snickers, the silent judgments that reinforce that most crippling of thoughts: “I do not belong here.”

Sotomayor knows what it means to question whether or not you belong. In many ways I suspect that is the formative human question - one that haunts those that are denied a seat at the table as a result of white male patriarchy. I am reminded of what Whoopi Goldberg said the day after Barack Obama was elected president: "I always thought of myself as an American...but suddenly last night I felt like I could put my suitcase down finally."

Its not only important that people like President Obama and Justice Sotomayor show us all - by their presence - that women and people of color belong. Their lived experiences and empathy with others who have felt the sting of not belonging are equally important.

That was the message so many critics missed in President Obama's speech to the graduates of Morehouse.

So your experiences give you special insight that today’s leaders need. If you tap into that experience, it should endow you with empathy -- the understanding of what it’s like to walk in somebody else’s shoes, to see through their eyes, to know what it’s like when you're not born on 3rd base, thinking you hit a triple. It should give you the ability to connect. It should give you a sense of compassion and what it means to overcome barriers.

So it’s up to you to widen your circle of concern -- to care about justice for everybody, white, black and brown. Everybody. Not just in your own community, but also across this country and around the world. To make sure everyone has a voice, and everybody gets a seat at the table.

Judge Sotomayor was making the same point in the speech that became so controversial during her confirmation hearing.


I would hope that a wise Latina woman with the richness of her experiences would more often than not reach a better conclusion than a white male who hasn't lived that life...

Personal experiences affect the facts that judges choose to see. My hope is that I will take the good from my experiences and extrapolate them further into areas with which I am unfamiliar...

Each day on the bench I learn something new about the judicial process and about being a professional Latina woman in a world that sometimes looks at me with suspicion...I willingly accept that we who judge must not deny the differences resulting from experience and heritage but attempt, as the Supreme Court suggests, continuously to judge when those opinions, sympathies and prejudices are appropriate.

A very wise Latina indeed - one who recognizes that part of her job is to demonstrate that when it comes to issues brought before the highest court in the land, understanding those differences matters. In other words, belonging matters.
at April 25, 2014