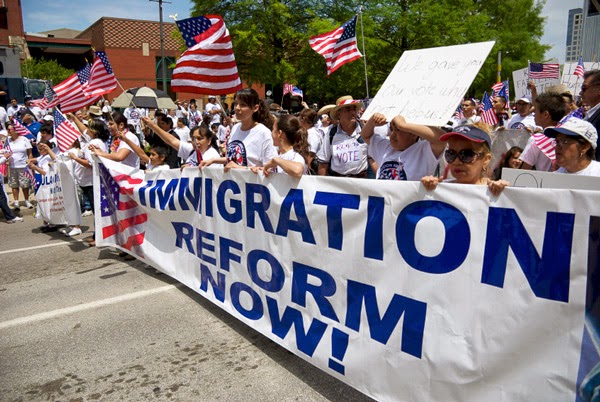 While stories about Ukraine and then Obamacare dominated the headlines for the last few weeks, there have been some very interesting developments on the issue of immigration reform.

For a great summary of how we got here, I highly recommend an article by Benjy Sarlin.


Supporters of immigration reform did everything they could to pass a law. They threw their support behind bipartisan negotiations in the Senate that led to the passage of a promising bill. They organized religious leaders, CEOs, and law enforcement to lobby Republicans in their districts. They even managed to broker a peace deal between unions and corporations.

None of it worked. Amid a growing consensus House Republicans are unlikely to pass a bill anytime soon, lawmakers, activists, and the White House are moving on to a post-reform phase focused on immediate relief for undocumented immigrants and wreaking electoral vengeance on the GOP...

The bigger action is on the executive side. Immigration leaders have long criticized President Obama for his record pace of deportations and called on him to issue an order broadly halting removals, especially in cases where families would be divided.

Obama and Democratic lawmakers working on reform were wary of such proposals last year, which Republicans warned would scuttle negotiations. As long as good faith talks continued the White House was able buy some breathing room on the issue. Now that hopes for a legitimate House GOP bill are fading, there’s little reason for pro-reform voices to temper their calls for immediate action.

In some ways, the tension that is growing between immigration reform advocates and President Obama is similar to what happened on the repeal of DADT. Advocates in both situations gave up hope for legislative relief and began to focus on the need for executive action. But there is one major difference between the two situations: DADT was eventually legislatively repealed in December 2010 during the lame duck session before Democrats lost their majority in the House. When it comes to immigration reform, hopes that a Republican-controlled House will move on this issue are increasingly dim.

This week Rep. Luis Gutierrez announced what appears to be a strategy that members of the Hispanic Caucus have worked out with the President.


This morning on the floor of the House of Representatives Rep. Luis Gutierrez (D-IL) told House Republicans that time is running out for them to take action on immigration reform. If action isn’t taken by the July 4th Congressional recess, he predicts that President Obama will take bold executive action to keep immigrant families together.

Recently President Obama directed Secretary of Homeland Security Jeh Johnson to review the department's deportation policy to find more humane ways to enforce the law. Brian Bennett has provided some much needed context for the changes the Obama administration has already made to those policies. Several items are worth noting:
As a result of these changes:


Deportations of people apprehended in the interior of the U.S., which the immigration agency defines as more than 100 miles from the border, dropped from 237,941 in Obama's first year to 133,551 in 2013, according to immigration data. Four out of five of those deportees came to the attention of immigration authorities after criminal convictions.

Many of those convictions are related to crossing the border — the other big consequence of the change in the way border removals are handled.

And so it will not be surprising if Sec. Johnson recommends exactly what former acting director of ICE John Sandweg suggests in terms of changes.


The answer to the president's directive is surprisingly simple: Homeland Security's Immigration and Customs Enforcement division, known as ICE, should eliminate "non-criminal re-entrants and immigration fugitives" as a priority category for deportation.

Current ICE policy prioritizes these individuals solely because they have previously been caught up in our immigration system, not because they represent a criminal threat. Taking them off the priority list would dramatically advance the president's goal of a more humane enforcement system and would enhance public safety and border security.

Whether or not the President does this rests completely on Speaker John Boehner's shoulders right now. If I had to predict, I'd guess he'll take a pass on comprehensive immigration reform in favor of igniting the teapublican base with howls of "Obama the Tyrant!!!" once the President takes this executive action.

But one way or another, undocumented workers who live in fear will find some relief after July 4th. It will be a messy and incomplete way of dealing with this ongoing problem. But until either Republican leaders have the courage to challenge their nativist base or Democrats win legislative majorities in Congress, this is the next best step.
at April 06, 2014