What has brought the Bundy's and Sterling's out of the woodwork? (updated)

Lately it can feel like: another day, another racist unleashed. All the oxygen these days is being soaked up by the recent remarks of Cliven Bundy and Donald Sterling. But the truth is - over the last few years we've been exposed to a pretty endless stream of this noxious stuff. 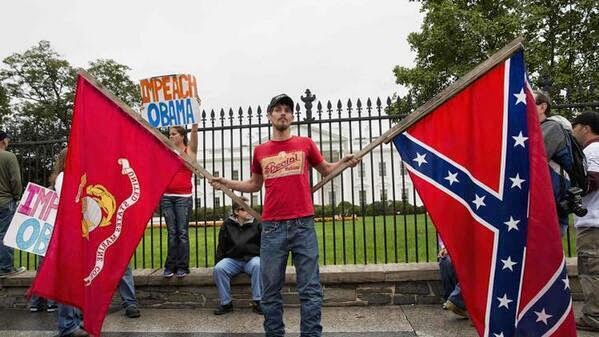 Its no coincidence that this is happening on the heels of electing our first African American president and as the demographics of this country are rapidly changing. But I'd like to look a little deeper and ask what it is these milestones have unleashed.

To answer that, I go back to something I've quoted here many times - the words of Derrick Jensen in his book The Culture of Make Believe.

I have spent the past several hours now thinking about the notion that masters "shall be entitled to their labor," and at the risk of overstating, it seems to me that entitlement is key to nearly all atrocities, and that any threat to perceived entitlement will provoke hatred...

The Civil Rights Movement certainly threatened that entitlement. When the dust settled though, most white people went back to normalizing it with what remained of their tradition, economics, religion, etc. And an awful lot of people of color got busy utilizing the doors the movement had opened up for them.

The next thing you know...we have everything from a Harvard-educated African American POTUS to a basketball player-turned-entrepreneur challenging the hold the 1%ers have on the NBA (why Donald Sterling is threatened by Magic Johnson but not his mixed-race girlfriend). All of the sudden the despised "have the power and wherewithal to not go along with - the perceived entitlement." The rhetoric of superiority is failing and the hatred is exploding.

I'd suggest there are two reasons for us to be clear about this. First of all, its important to note that the rhetoric of superiority is failing. People of color like President Obama, Justice Sonya Sotomayor and yes, Magic Johnson are demonstrating every day that they are the intellectual, political and business equals to white men. No longer confined to the fields of sports and entertainment, they are not only excelling at what they're doing - they're calling out the barriers that still exist (IOW, not playing the "good Negro" game). That threatens the whole fabric of white male entitlement.

But perhaps even more importantly, they're doing it in a way that doesn't leave any room for rational critiques from the naysayers. For example, in his speech on racism during the 2008 primaries, Barack Obama not only empathized with those who have been on the receiving end of racism in this country, he also spoke about the plight of white working class Americans and acknowledged the anger they feel. And much to the indignation of many on the left, the President has consistently held out his hand to those who disagree with him politically to work towards finding common ground.

Lacking any rational response, the entitled are left with only their hatred and fear. It has been unmasked and no longer lingers underground. The question that leaves for the rest of white Americans who are observing all this is: Now what? Are we really going buy into the need to "take our country back" to fighting over our perceived entitlement? Or are we ready to exorcise that fear and let it go? Its up to us.

UPDATE: WOW! Deadspin just published more of the conversation between Sterling and his girlfriend. It demonstrates exactly what Jensen was saying about entitlement. At one point she reminds Sterling that his basketball team is made up of mostly black players. Here's his response:


I support them and give them food, and clothes, and cars, and houses. Who gives it to them?

OMG - its not that these players EARN money that they then spend on food, clothes, cars and houses! Oh no - Sterling GIVES it to them. And its not that he makes scores of money off of their labors on the basketball court. He's simply doing it out of the goodness of his heart, I guess. So there you have it...the root of racism. Now, along comes someone like Magic Johnson who has enough money to challenge that entitlement and BAM! it explodes.
at April 27, 2014