The good news about Obamacare you might have missed (updated)

While almost everyone is focusing on the recent Halbig decision by a federal court, you might have missed some good news that was just announced about Obamacare. As background, I've been paying a lot of attention to what I think is one of the most important insurance reforms included in the legislation - the medical loss ratios. They require insurance companies to spend 85% (80% for those in the small group market) of premiums on healthcare. If they spend more than 15-20% on administration/profit, they are required to pay it back in a rebate to their customers.

The Department of Health and Human Services just announced that those rebate checks will be in the mail shortly.


U.S. health insurers will send out about $330 million in rebates to employers and individuals this summer under President Barack Obama's healthcare law, the U.S. Department of Health and Human Services said on Thursday...

The rebates will go to about 6.8 million people and have a value of about $80 per family. They are to be sent by Aug. 1 either directly to consumers or to the employer providing the health coverage, who is required to pass the savings onto employees, the agency said in a report.

But perhaps even more important is the impact this provision has had on premiums overall.


If insurance companies had maintained the 2011 ratio of premiums relative to the cost of medical care, consumers would have spent $3.8 billion more in additional premiums in 2013, the health agency said.

In other words, in 2013 Obamacare saved us all $3.8 billion in premiums via the medical loss ratios. That, my friends, is a BFD!!!

UPDATE: The White House just released this image showing the total savings from 2011-2013. 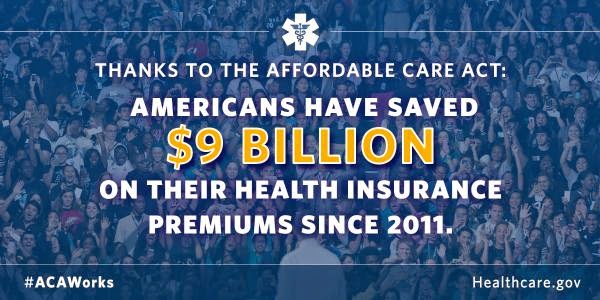