In the event that Iran and the members of P5+1 reach a preliminary agreement on Iran's nuclear program this week, we can expect a release of sound and fury from conservatives about how it sets the world on fire. To prepare yourself for making your own determination about the value of any such agreement, Jeffrey Goldberg lists the five questions you should ask.

During the 1980's when Iran and Iraq were at war with each other, the Reagan and Bush administrations facilitated the selling of chemical agents and equipment to Iraq. Then during the first Gulf War, the U.S. bombed some of those chemical weapons facilities and more than 200,000 of our troops were exposed to nerve gas and other chemical agents. If you've ever questioned why President Obama hesitates to arm factions in the Middle East, you'll want to read the whole story by Barbara Koeppel.

One of the negative consequences to the delay in a Senate vote to confirm the nomination of Loretta Lynch as our next Attorney General is that it has given rightwing advocacy groups more time to lobby against her. It should come as no surprise to anyone that the NRA is doing just that.

Yesterday when I listed some of the recent accomplishments of the Civil Rights Division at DOJ, I left one out.


Teenagers awaiting trial on adult charges in Baltimore are being kept in solitary confinement for far too long — up to 143 days in one case, according to a highly critical review by the U.S. Justice Department's Division of Civil Rights.

Federal prosecutors say being isolated for more than a few days can damage a person's mental health — especially if it's a teenager whose brain is still developing. But teenagers accused of breaking rules inside the Baltimore City Detention Center are being isolated for 13 days on average, and in some cases, far longer.

Placing children (and yes, teenagers are children) in solitary confinement is unacceptable. End of story.

On a lighter note, here's something to look forward to this fall.

Director Sarah Gavron’s pic centers on Maud (Mulligan), a working wife and mother who decides she must fight for her dignity both at home and in her workplace. Realizing she is not alone, she joins with several other women in becoming an activist. Those early efforts at resistance were passive, but the suffragettes become galvanized — risking it all for the cause of women’s right. 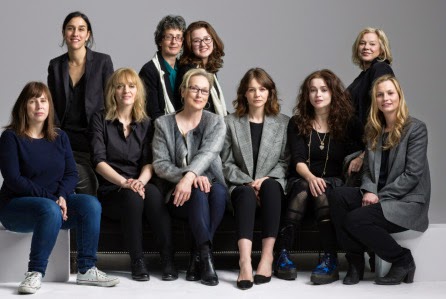 That provides the perfect segue into the next entry in "Nancy's favorite feminist songs." This one has a definite 80's feel to it. But I still love it a lot.