Donald and His Terrible, Horrible, No Good, Very Bad Week 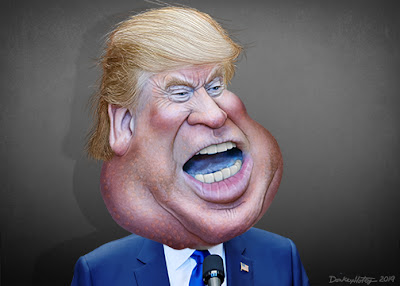 When young Alexander had a terrible, horrible, no good, very bad day, children delighted in the hyperbole of seeing someone their age stumbling through a series of challenges from the time he got out of bed in the morning until he retired that night. But when a president has a terrible, horrible, no good, very bad week, the nation hangs its head in shame and cringes over what might come next.

On Saturday, the president announced that he would nominate Amy Coney Barrett to the Supreme Court, sparking a debate among Democrats over how to respond to the blatant display of hypocrisy from Republicans. For the Trump campaign, it was a high point. Things went downhill from there.

It all began on Sunday evening when the New York Times dropped their bombshell report on Trump's tax returns. We found out precisely why he's worked so hard to keep them secret.

1. His $400 million in debts pose a national security threat.

3. He paid a grand total of $750 per year in federal income taxes over the last two years—significantly less than the amount he has shelled out to keep former mistresses quiet.

As we were all absorbing that news, the police in Ft. Lauderdale were taking Trump's former campaign manager into custody for being armed, intoxicated, and threatening to kill himself while being barricaded in his home. Video of the police trying to subdue Brad Parscale and wrestling him to the ground spread across the internet. We subsequently learned that Parscale is reportedly under investigation for stealing up to $40 million from the Trump campaign and the Republican National Committee. If true, the president has to worry about yet another member of his team turning on him in exchange for leniency.

As if that wasn't bad enough, Trump topped things off with a debate performance on Tuesday that can only be described as a "shitshow." Sources told Gabriel Sherman that America got a lesson in what the president looks like behind closed doors.

Trump doesn’t accept the consensus that the debate was a disaster because, sources said, he was unabashedly himself. “The thing about the debate is people got to see why no one that has any integrity can work for Trump. This is what Trump is like in the Oval Office every day. It’s why [John] Kelly left. It’s why [Jim] Mattis quit,” said the prominent Republican. “Trump doesn’t let anyone else speak. He really doesn’t care what you have to say. He demeans people. He talks over them. And everyone around him thinks it’s getting worse.”

All of this comes as Trump trails Biden badly in the polls. Any honest accounting would categorize this past week as terrible, horrible, no good, and very bad for Donald Trump.

Tonight, @FLOTUS and I tested positive for COVID-19. We will begin our quarantine and recovery process immediately. We will get through this TOGETHER!

Keep in mind, this is the guy who has constantly mocked Joe Biden for wearing a mask and campaigning from his basement. So yeah, karma really is a bitch.

And just to be clear: