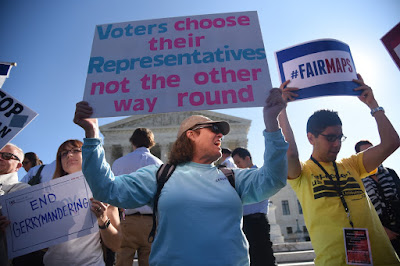 One of the most effective strategies that Republicans have employed to maintain power, even as their party slides into minority status, is for politicians to pick their voters, which is how former Attorney General Eric Holder has described the process of gerrymandering.

Every ten years, once the national census is complete, states engage in the process of redistricting, meaning that they redraw the lines of both state and local districts to account for any changes in population. Gerrymandering is the process of drawing those districts in a way that favors the party in power. To give you some idea of the lengths to which Republicans have gone to pick their voters, here is how they initially drew the map of North Carolina’s 12th congressional district. 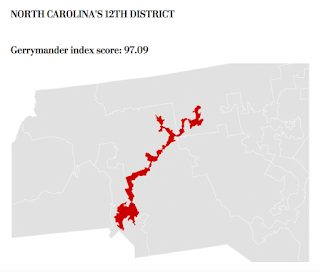 As we’ve seen over the last decade, these gerrymandered districts have had a tremendous impact, not just on national politics, but at the state and local level as well. Nowhere is that better demonstrated than the divergent paths taken by Wisconsin and Minnesota in response to the 2010 elections. Republicans gained control of legislatures in both states. But while Scott Walker won the governor’s race in Wisconsin, Democrat Mark Dayton squeezed out a win by 0.4 percent in a three-way race.

The paths of these two states—who share a lot in common—diverged dramatically because Dayton was able to veto the gerrymandered districts that were drawn by Minneosta’s Republican legislature, leading to a court-appointed commission that took over the process. After the 2018 midterms, journalist Craig Gilbert ran the numbers on how gerrymandering in Wisconsin gave Republicans a major advantage.

Republicans enjoy a built-in 64-35 advantage in the partisan makeup of the 99 Assembly districts. In a hypothetical 50-50 election, in which there are equal numbers of Democratic and Republican voters in Wisconsin, no one crosses party lines and independents split down the middle, that translates into a massive 29-seat GOP advantage in the Assembly. That's very close to the 27-seat margin (63-36) that Republicans won last month.

As Democrats focus on defeating Donald Trump and winning a majority in the Senate, it is equally important to pay attention to the redistricting process that will be underway in 2021. That is precisely why Barack Obama and Eric Holder teamed up to launch the National Democratic Redistricting Committee.

As Holder explained, “this is our once-in-a-decade chance to get it right.” On October 9th, Obama and Holder will host a virtual event to “engage grassroots supporters on the importance of getting involved in the fight to strengthen our democracy, encourage people to vote in the elections this fall, and engage participants ahead of the 2021 redistricting process.”

With the 2020 elections just over a month away, it is worth looking at the races the NDRC has targeted in 13 states: Florida, Georgia, Kansas, Kentucky, Louisiana, Minnesota, New Hampshire, North Carolina, Ohio, Pennsylvania, Texas, and Virginia. The first line of defense in these states is to ensure that Democrats gain or maintain control of at least one branch of government to provide them with leverage in the negotiations over redistricting.

Eight of the states being targeted by NDRC currently have divided government. Voters in Ohio, where Republicans control all three branches, overwhelmingly passed a referendum in 2018 that would set up a bipartisan redistricting commission if the General Assembly failed to pass a plan with a supermajority. That leaves three states that should be prime targets in the 2020 election: Florida, Georgia, and Texas. According to recent population estimates, Texas is likely to add three Congressional seats based on the 2020 census and Florida could gain two, making their redistricting processes even more critical.

Interestingly enough, a look at the numbers indicates that the best chance Democrats have of flipping control comes in Texas. Abby Springs from Progress Texas noted that it would only take nine seats to give Democrats control of the Texas House and she identified 22 opportunities. Here is what would be required in all three states:

You can check out the NDRC’s list of endorsed candidates in Florida, Georgia, and Texas to find which seats they consider to be at play.

I would remind you once again that one of the main reasons that Minnesota avoided going down the same road as Wisconsin is that Mark Dayton won the governorship a decade ago by 0.4 percentage points. In other words, when it comes to preserving democracy, every vote matters.