One of the reasons why the last four years were so exhausting is that every day brought a whole new series of outrages. To deal with one meant having to dismiss the next few that came in rapid succession. It was hard to keep up. We all adjusted, sometimes worrying that the onslaught would cause us to lose our ability to be shocked.

Given all of that, Virginia Heffernan asks a critical question: "Can quiet Joe be just as compelling as outrageous Donald?" The simple answer to that question is, of course, "no."

Science tells us that our brains are hardwired for something called "negativity bias," meaning that we react more immediately and strongly to emotions like anger and fear than we do to positive and hopeful feelings. Newsrooms have always known that, which is where the motto "if it bleeds, it leads" comes from. We often hear people complain that the media doesn't focus on good news. That's because when they do, no one pays attention.

I find it interesting that Heffernan referred to "quiet Joe." That might be the first time anyone has ever used that descriptor when referring to President Biden. It's obvious that he's a talker...always has been. But from the moment he got elected, Biden put his head down and got to work. There hasn't been a lot of fanfare—just action. It is all somewhat reminiscent of "no drama Obama."

All of that poses a bit of a challenge to the media and those of us writing about politics. Perhaps that is why, with the silencing of Trump, all of the focus has shifted to daily outrages about Rep. Marjorie Taylor Greene. Just like Trump, she feeds the outrage machine plenty of red meat. We all get our fix.

But while negativity bias helps us identify threats, it isn't adaptive when it comes to solving the issues we face as a country. Chris Stirewalt, who was fired from his job at the Fox News decision desk for making the right call about Arizona going to Biden in the 2020 election, suggests that, as news consumers, we are "both overfed and malnourished." We are exposed to more "news" than ever, but our diet isn't balanced.

None of this is to suggest that we should ignore Rep. Greene—or any other outrage dished up by the opposition. But if that's all we're talking and reading about, we're malnourished when it comes to actual news.

I will occasionally give voice to my own outrage. But I suspect that readers get plenty of that elsewhere. That is why I'll spend most of my time keeping track of what "quiet Joe" and other Democrats are up to when it comes to the challenges we face as a country. How about a few vegetables to go with that red meat? 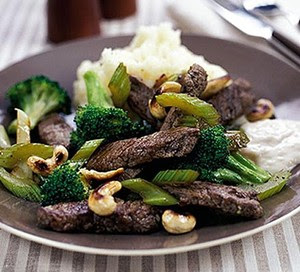