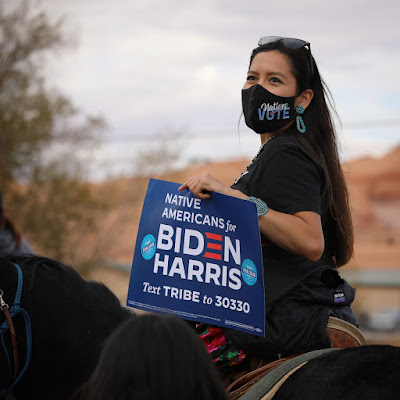 Somewhat buried in all the news about the flurry of activity from the Biden administration is the fact that he is keeping the promises he made to Puerto Ricans and Tribal Nations.

On the former, you might remember that in 2017, Puerto Rico was devastated by Hurricane Maria. Trump found numerous ways to keep the island from accessing recovery funds that were distributed to states like Texas and Florida, which were also hit hard. During the 2020 election, candidate Biden had a clear plan for supporting Puerto Rico, including a commitment to ensure access to those recovery funds. This week, he made good on that promise.

The Biden administration said it would release $1.3 billion in aid that Puerto Rico can use to protect against future climate disasters, and is starting to remove some restrictions put in place by the Trump administration on spending that was to help the island after Hurricane Maria in 2017.

Administration officials, describing the move as a first step toward addressing racial inequality through policies designed to address climate change, said they planned to ease the limits that the Trump administration placed on another $4.9 billion in aid on the morning of Jan. 20, a few hours before the former president left office.

Puerto Rico’s reconstruction after Maria, which devastated the island more than three years ago, has been far slower than the recovery in other parts of the country, such as Texas and Florida, that were also struck by major disasters that year. That is partly because the Department of Housing and Urban Development had placed restrictions on Puerto Rico’s aid funds that didn’t apply to other recipients, according to current and former officials and policy experts.

👍Biden Administration announced that @HUDgov will release $6.2B in funds for disaster mitigation for 🇵🇷.

This has been a priority. Many of you joined Power4PR online or showed up last year to HUD offices to demand the release of funds and raise the volume for #PuertoRico. 👇 pic.twitter.com/XalPUvSnLx

Last Wednesday, when Biden signed a series of executive orders related to racial equity, included was a memorandum that requires all federal agencies and executive departments to have a “strong process in place for tribal consultation." Along with nominating Deb Haaland to be the first Native American to lead the Department of Interior, it was one of several actions Biden has taken in the course of just two weeks that led to this statement from Fawn Sharp, Quinault, president of the National Congress of American Indians.

“I am both excited and encouraged that the Biden Administration is taking so many meaningful and significant steps towards Tribal Nations' priority issues -- respect for sovereignty, racial equity, urgent action on climate change, protection of sacred sites and ancestral ecosystems, and the commitment to meaningful Tribal consultation,” she said. “There's immense work still to be done, but we celebrate that the first steps President Biden has taken towards truth and reconciliation with Tribal Nations are so responsive to our needs and aligned with our values and principles."

These actions by Biden tell us more than that he is intent on keeping his campaign promises. They are powerful demonstrations that he intends to be a president for ALL Americans—even those that many of us have forgotten.