Josh Hawley Deserves to be Cancelled

Senator Josh Hawley is traveling the circuit of right wing media to bask in his victimhood. Here he is with Mick Huckabee on Saturday.

"I'm not willing to bow to the liberal, woke mob."

This weekend Senator Josh Hawley FIRES BACK at the radical left's agenda.

Tune in at 8/7c this Saturday! 🇺🇸 pic.twitter.com/L9xVuZYUyo

When Hawley claims that the "woke liberal mob" wants to silence all dissent, Colin Kaepernick would be right to say, "hold my beer." 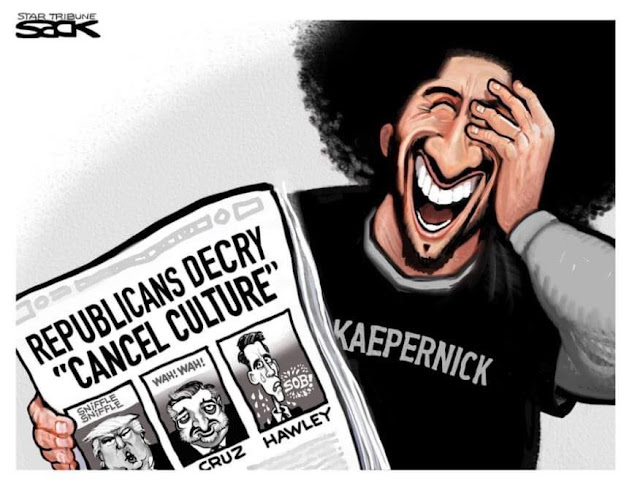 We could compare the so-called "cancel culture" that led to Kaepernick's loss of his football career to the fact that Hawley had to find another publisher for his book. But beyond that, the two situations don't have much in common.
Hawley raised a fist in support of a mob that was about to storm the U.S. Capitol in support of a lie he had helped promote about a stolen election. The result was an attempted coup that was a direct assault on our democracy. In the end, five people died, dozens were injured, and everyone else in the building was traumatized. 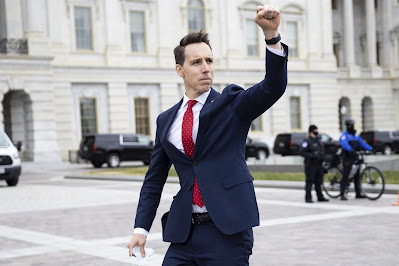 Even after those events, Hawley voted in favor of challenging the results of the election based on a lie. What's even worse is that, while he wants to chest-thump these days about being brave enough to not be silenced, he blamed his whole schtick on his constituents, claiming that because they believed the lie, he would fight for them. Real courage would have meant telling his constituents the truth. But Hawley is counting on the support of the insurrectionists to advance his political ambitions. For democracy's sake, that kind of cravenness must be called out.
In contrast, we all know Colin Kaepernick's story. He quietly and respectfully took a knee during the national anthem to protest injustice. 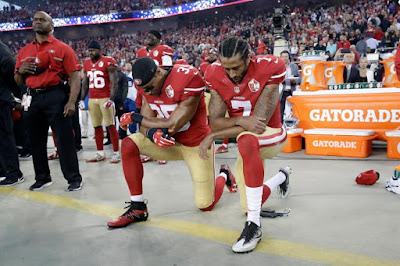 In an attempt to silence Kaepernick, that simple act was turned into an attack on the flag and military troops who serve this country. In other words, to "cancel" Kaepernick, the opposition had to shamelessly lie. Who can forget how a white guy running for the Senate deconstructed that lie?

“I can think of nothing more American than to peacefully stand up, or take a knee, for your rights any time, anywhere, any place.” Watch Beto thoughtfully answer a question on the issue of NFL players taking a knee. pic.twitter.com/ENvZ1Z2b4U

When the injustice of police killing unarmed Black people continued and protests erupted all over the country, the opposition was horrified and suggested that people should be protesting peacefully. Oh...the irony!
Let's be clear. One man peacefully took a knee to protest violence. The other raised a fist in support of a lie that led to violence. That is precisely why Hawley deserves to be cancelled.
at February 07, 2021