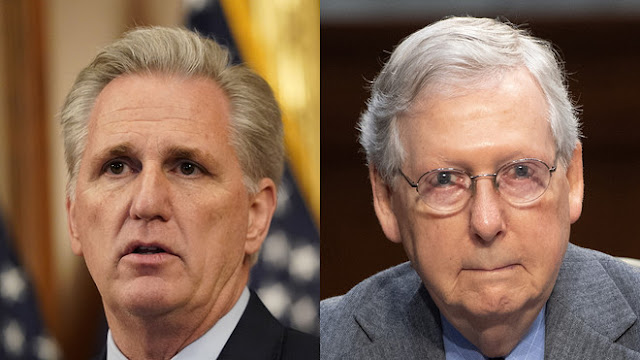 Nevertheless, when the House voted last week on legislation to do just that,  Republicans almost universally voted against the measure. Due to the Democratic majority, the bill passed 227-203. But Republican obstruction will probably be strong enough in the Senate that it will fail to overcome a filibuster.

Similarly, more than 70 percent of Americans support the Dream Act, which would grant citizenship to immigrants who were brought to the U.S. as children. But when the House voted on such a measure this week, the vote broke down primarily on party lines, with the vast majority of Republicans in opposition. Here's what Nicholas Fandos wrote about the bill's prospects in the Senate.

While some Republicans there have pledged support for Dreamers in the past, their party is increasingly uniting behind a hard-line strategy to deny the president the votes he needs to make any new immigration law and use the worsening situation at the border as a political cudgel.

“There is no pathway for anything right now,” Senator Lindsey Graham, Republican of South Carolina and a key player in past bipartisan immigration pushes, said this week.

Of course, we saw the same scenario play out with the coronavirus relief bill that was recently passed. While it garnered major support from voters, Republicans opposed it unanimously.
In the midst of all of this, it is infuriating to watch the conversation be dominated almost entirely by what Democrats plan to do about the filibuster. The only relief from that discussion comes when pundits suggest that Biden and the Democrats are destined to fail in passing their agenda. Almost no one is putting pressure on Republicans, who are consistently voting against the bipartisan will of the people.
On Wednesday, newly-elected Senator Raphael Warnock gave his first speech on the Senate floor in support of voting rights. Steve Bennen told Rachel Maddow that it was the best he had ever heard. If you have twenty minutes, take a listen.
In addressing the fact that Republicans will use the filibuster to block legislation to secure voting rights, Warnock said that, "It is a contradiction to say we must protect minority rights in the Senate while refusing to protect minority rights in our society.” Boom!
Later that day Warnock sat down for an interview with Rachael Maddow. At the 0:43 mark, he responded to a question about how Democrats can move forward on voting rights, given Republican intransigence.

It's interesting...folks ask me, "should you get rid of the filibuster or not?" It seems to me that the onus really is on those in the chamber who have not yet decided to support voting rights, because they could vote it up. They could vote for it—because what is at stake is the viability and the health and the credibility of our democracy.

Warnock is exactly right. It is beyond time for people in the media to start asking Republicans why they are opposed to voting rights. What is at stake is the viability of our democracy. That is primarily true when it comes to voter suppression. But it is also true when voters no longer have a voice in congress because Republicans pay no price for ignoring the will of the people on issue after issue.

Whether we're talking about gun safety reform, immigration, economic stimulus, or voting rights...the people are much more united than their representatives in Washington. Until Republicans are held accountable for ignoring their wishes, that will continue.