The Tie That Binds Xenophobia and Misogyny: Replacement Theory 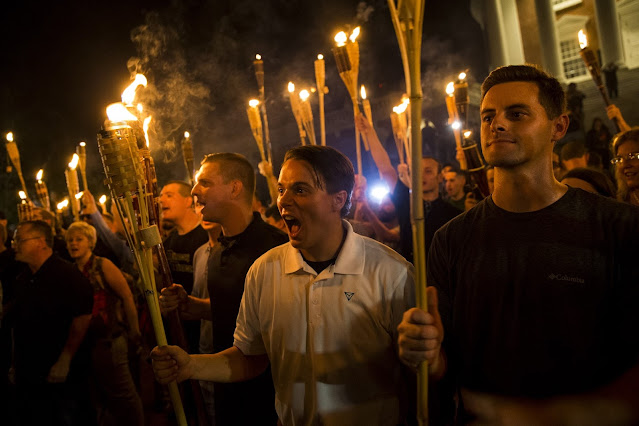 Given the impact that the coronavirus pandemic has had on our economy, it has been all but forgotten that perhaps the biggest challenge we faced prior to 2020 was a shortage of workers. Back in late 2019,  Alexia Fernández Campbell explained what was happening.

The US economy doesn’t have enough workers.

This is not normal. Ever since Labor began tracking job turnover two decades ago, there have always been more people looking for work than jobs available. That changed for the first time in January 2018...

Nearly every industry now has a labor shortage, but here’s the twist: Employers are having a harder time filling blue-collar positions than professional positions that require a college education.

The hardest-to-find workers are no longer computer engineers. They are home health care aides, restaurant workers, and hotel staff. The shift is happening because more and more Americans are going to college and taking professional jobs, while working-class baby boomers are retiring en masse.

At the time, Republican House Speaker Paul Ryan noticed the problem and proposed what might charitably be called "an interesting solution."

Noting the impact the labor shortage would have on programs like Social Security and Medicare as Baby Boomers retired, Ryan basically told women to fire up their uteruses and have more babies or he'd be forced to take it out on granny. Of course, Ryan ignored the fact that policy proposals like reforms to our immigration and criminal justice systems could help address the labor shortage.

Even after the coronavirus hit, Tucker Carlson was expressing a similar concern. While not tied directly to the economy, he engaged a wild conspiracy theory about how Western civilization is threatened by falling sperm counts.

One of the reasons I bring this all up is because on Wednesday, Carlson did a complete about-face.

Now...all of the sudden...when we're talking about brown people, this country is too crowded. That segment is, of course, based on an outright lie. The great influx of immigrants amounts to unaccompanied child migrants who are being allowed to stay with sponsors while they await court hearings on their asylum claims.

The reason we should all be concerned about this kind of rhetoric is that it begins to build a case for "replacement theory," which is a dangerous melding of xenophobia and misogyny.

An extension of colonialist theory, [replacement theory] is predicated on the notion that white women are not having enough children and that falling birthrates will lead to white people around the world being replaced by nonwhite people.

And like so many fundamentalist ideologies, the foundation of this one requires the subjugation of women.

As an example, Hungary's Prime Minister Viktor Orbán launched a "procreation, not immigration" policy, which opposes immigration and instead subsidizes traditional, nuclear Hungarian families to have more children.

Here in the United States, one of the people who has embraced replacement theory is Kathleen Eaton Bravo, the founder and CEO of Obria, a network of anti-abortion clinics in California, Oregon, Washington, Iowa, Texas, and Georgia. Here's what she said during a 2015 interview with the Catholic World Report:

Few realize that [abortion] has had a devastating impact on our society, and threatens our culture’s survival. Take the example of Europe. When its nations accepted contraception and abortion, they stopped replacing their population. Christianity began to die out. And, with Europeans having no children, immigrant Muslims came in to replace them, and now the culture of Europe is changing.

The US faces a similar future. In only two of the past 40 years have we replaced our population. We’re on the same track as Europe. The church and family are in crisis...In a few decades we’ll be in the same place as where Europe is today. And, economically we’ll be in crisis because we’ll have so few young people working.

In 2019, Trump’s HHS awarded $5.1 million in Title X family-planning funds to Obria. In addition, several White House officials and Republican members of congress attended a conference that year put on by the Hungarian embassy titled, "Make Families Great Again." The event focused on Hungary’s policy response to the decline of its birth rate below replacement level and promoted Orbán’s “Family Protection Action Plan.” Speakers exhorted women to have more babies.

All of this is, of course, tied to the Great Replacement conspiracy theory that inspired white supremacists to chant "we will not be replaced" during their march in Charlottesville and was part of the manifestos written by the mass murderers in El Paso and New Zealand.

It is important for all of us to recognize the connection between white supremacy and misogyny that binds these hateful ideologies and the danger they pose to our culture. The attack on Asian women in Atlanta this week only underscores that point. Whether we're immigrants, people of color, and/or women...we're all in this together.