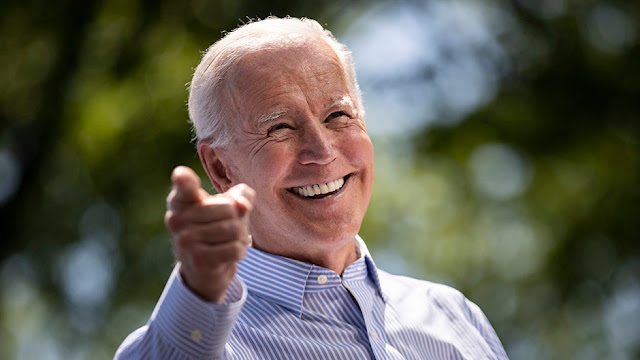 During the 2020 campaign, Donald Trump struggled to come up with a derogatory nickname for Joe Biden. For example, during a staged event in New Jersey, he asked the crowd "What’s better, Sleepy Joe or Slow Joe? I go back and forth.” On other occasions, he tried "Basement Biden," "Crazy Joe Biden," and "Slow Joe." Of course there were others. But a theme that emerged was an attempt to paint Biden as mentally incompetent due to his advanced age.

Even as the president came out of the gate running, some of Trump's enablers still haven't completely let go of that one. They insist that Biden is merely a mouthpiece (a kind of Manchurian candidate), and someone else is behind the scenes pulling the strings. At various times that has been Vice President Kamala Harris, dark money interests, or "the Squad." There have even been attempts to name Chief of Staff Ron Klain as the "real president."

But just as Trump failed to land a blow with "Sleepy Joe," these attempts to paint him as incapable of doing the job are at odds with the need for Republicans to cast him as some kind of radical who is pushing through an agenda that is out of step with the American mainstream. And so, according to J. Peder Zane at the right wing site RealClearPolitics, "'Sleepy Joe' Was Just a Facade."

The candidate who promised a return to “normalcy” is advancing the most radical agenda since Lyndon Johnson’s Great Society. The candidate who pledged to unify the nation is rejecting all compromise. He is deploying deception and stoking racial tension to divide and conquer America for the left.

In order to paint Biden as a radical, Zane has to suggest that his proposals aren't popular with voters. So he adopts the Republican line about the president's infrastructure proposal.

Only about 15% of the spending would fund roads, bridges and other projects commonly understood as infrastructure and generally supported by the American people. The bulk of the money would go to a liberal wish list of more controversial social programs, making the bill a Trojan horse.

Here's what a CBS/YouGov poll found when it comes to public support for those "controversial social programs" in Biden's infrastructure bill. 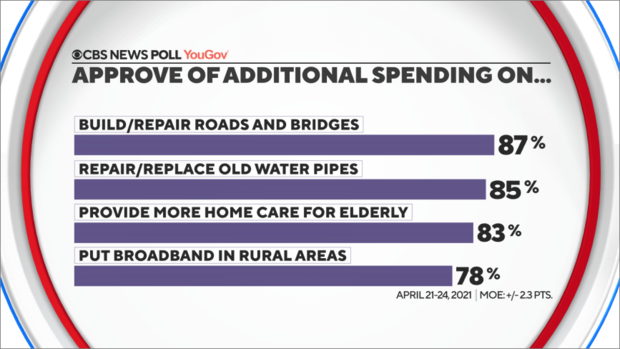 A CNBC poll found almost identical results. If Biden is such a radical, so are about 80 percent of Americans.
This demonstrates Biden's ingenious plan for dealing with Republican obstruction. He was part of the Obama administration that came into office promising to unify the country, only to see Republicans adopt a plan of total obstruction as a way to take a sledge hammer to that promise. So Biden's first step was to re-define bipartisan as support from American voters across party lines. Then he flooded the zone with liberal proposals with broad bipartisan support from the public.
That has put Republicans on defense, claiming that things like universal access to pre-K and affordable child care are attempts to "take away the freedoms of parents to make decisions for their children."

“I WANT ALL CHILDREN TO HAVE ACCESS TO OPPORTUNITY” -- @MarshaBlackburn on why the government should not take away the freedoms of parents to make decisions for their children#NextRevFNC pic.twitter.com/cKuFayauWs

In another media appearance, Sen. Blackburn said that Biden's proposal for universal pre-K would be mandatory — a complete and utter lie.

But perhaps even more importantly, that nonsense completely ignores the facts about women's lives.

COVID-19 is hard on women because the U.S. economy is hard on women, and this virus excels at taking existing tensions and ratcheting them up. Millions of women were already supporting themselves and their families on meager wages before coronavirus-mitigation lockdowns sent unemployment rates skyrocketing and millions of jobs disappeared. And working mothers were already shouldering the majority of family caregiving responsibilities in the face of a childcare system that is wholly inadequate for a society in which most parents work outside the home...

COVID-19 has also increased the pressure on working mothers, low-wage and otherwise. In a survey from May and June, one out of four women who became unemployed during the pandemic reported the job loss was due to a lack of childcare, twice the rate of men surveyed. A more recent survey shows the losses have not slowed down: between February and August mothers of children 12 years old and younger lost 2.2 million jobs compared to 870,000 jobs lost among fathers.

Biden is forcing Republicans to go on record to justify their obstruction of a whole myriad of proposals that would support working families and tackle the roots of income inequality. That is an argument he can win, demonstrating that "Sleepy Joe" knows exactly what he's doing.