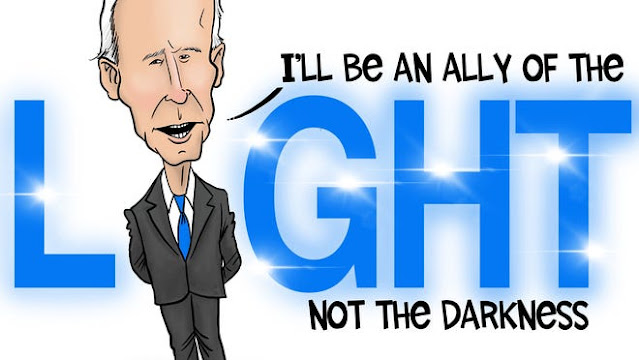 Adam Gopnik has written a fascinating piece outlining Biden's "exasperating but effective strategy to counter Trumpism." He starts out by noting that it's never a good idea to "play a guy at his own game." So what is the game Trump and his enablers are playing?

Donald Trump invented a game: of bullying, lying, sociopathic selfishness, treachery, and outright gangsterism, doing and saying things that no democratic politician had ever done or even thought of doing, and he did it all in broad daylight...It was a game designed for Trump alone to win, but all too many got drawn into it...It was designed, in plain English, to throw out so much crap that no one could ever deal with it all. Trying to bat the crap away, you just got more of it all over you, and meanwhile you were implicitly endorsing its relevance.

Perhaps since the dawn of time, people have been giving advice about how to deal with bullies. For the most part, conventional wisdom suggests that a show of physical force is necessary. So we teach children who are being bullied to punch back. But with people like Trump and his minions, we're talking about verbal bullying. So a lot of people find satisfaction when someone "hits back" verbally the way that Joy Reid took on Tucker Carlson.

While that can be emotionally satisfying (which is an important factor to consider), it doesn't have a lot of impact on the "game." As Gopnik noted, you simply invite more crap and implicitly endorse its relevance.
That last part has a lot to do with why I chose silence for the last two months. I refuse to play the game by giving any credence to the malicious lies being told by the right - even if it is in an effort to discredit them. For example, these days Tucker Carlson is making a name for himself by saying totally outrageous things and garnering headlines all over the media. While we congratulate ourselves for landing a good verbal punch, he's laughing all the way to the bank.
As Gopnik notes, President Biden refused to play Trump's game. He recognized that "an atmosphere of aggravation can only work to the advantage of the permanently aggrieved." Instead, he has focused on how to improve the lives of Americans—whether it be through tackling the coronavirus or proposing major investments in infrastructure. Pete Buttigieg, Biden's Transportation Secretary, put it this way during the campaign: "You can’t defeat a cartoon villain by being a cartoon hero. You defeat a cartoon villain by helping people remember that life is not a cartoon."
One of the reasons I was so interested in Gopnik's piece is that, over the years, I've suggested that this same strategy has been used by Michelle Obama - the only person I know of that effectively silenced Trump. As an example, her speech at the virtual Democratic Convention in 2020 included a description of two visions of America. The one Trump inhabits is totally void of empathy. It's the place where "greed is good, and winning is everything because as long as you come out on top, it doesn’t matter what happens to everyone else." The other is a place where courageous people go the extra mile for each other and pursue justice. In the end, Obama focused our attention on that one.

This is who we still are: compassionate, resilient, decent people whose fortunes are bound up with one another. And it is well past time for our leaders to once again reflect our truth.

As I listened to Michelle’s speech, it struck me that, given what we know about Donald Trump, I doubt he even understood what she was talking about. I’m sure he understood the words she used, but she addressed our common humanity—something his narcissistic ego has never actually experienced. As a result, Trump has never openly criticized Michelle Obama or used one of his ubiquitous nick names for her. She refused to play his game and he was left flat-footed.

Similarly, Biden has rarely engaged on Trump's level. Instead, he has focused almost entirely on speaking directly to the American people and promoting an agenda that garners their support.

None of this is to suggest that we should ignore Trump and his minions. What they are doing poses a serious threat to our democracy and we have to take that seriously. But I'm equally certain that we will not be successful in defending democracy if we play their game.

Over the last few days I've been thinking about a fable I read back in the 80's (which I can't find anywhere on the internet today). It is the story of a woman who worked all night trying to sweep away the dark. When dawn finally came, she was so tired that she'd fallen asleep.

We can't let ourselves get consumed with defeating the darkness. No matter how bleak things look, there is a crack in everything...that's how the light gets in.

So let your little light shine and let's see how many cracks we can find!
at July 12, 2021