Democrats Must Reject the Way That Republicans Wield Power 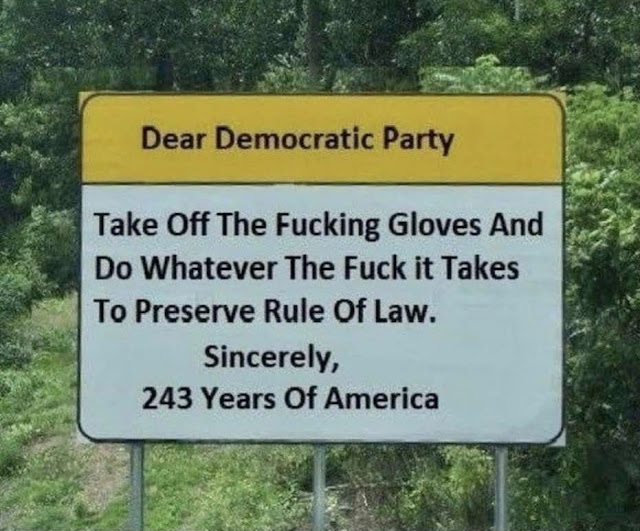 The sign above showed up on my Twitter timeline recently and it is not hard to understand why. A theme that seems to reverberate among Democrats is that, as the old saying goes, they "bring a knife to a gunfight." The sentiment is that Republicans fight ruthlessly while Democrats tend to follow the rules.
One of my favorite political commentators, Paul Waldman, weighed in on this theme with a piece titled, "The harsh truth of this moment: Republicans understand power. Democrats do not."

We’re seeing what a profound difference there is in how Democrats and Republicans view power. When Democrats have it, they’re often apologetic, uncertain and hesitant to use it any way that anyone might object to. Republicans, on the other hand, will squeeze it and stretch it as far as they can. They aren’t reluctant, and they aren’t afraid of a backlash. Whatever they can do, they will do...

[Republicans] do not quake at the prospect of the electorate’s displeasure, especially when they’ve done so much to ensure that the will of the electorate can be thwarted with the right combination of gerrymandering and voter suppression. They know what they want, and they’ll do what’s necessary to get it.

And Democrats? They fret and worry, they restrain themselves, they recommit to norms the other side has already trashed, they live in fear of political repercussions that never come. And their own goals languish while Republicans turn America into a darker, meaner, crueler place.

This assessment gets at what might be the biggest meta challenge Democrats face today. So it is important for us to think as deeply about process as we often do about policy.

There is some truth to the notion that Democrats tend to worry too much about backlash. I suspect that comes from an assumption that voters know the truth and are willing to hold bad actors accountable.  As former Republican congressional staffer Mike Lofgren noted, the GOP has based their strategies on a very different assumption.

There are tens of millions of low-information voters who hardly know which party controls which branch of government, let alone which party is pursuing a particular legislative tactic. These voters' confusion over who did what allows them to form the conclusion that “they are all crooks,” and that “government is no good,” further leading them to think, “a plague on both your houses” and “the parties are like two kids in a school yard.” This ill-informed public cynicism, in its turn, further intensifies the long-term decline in public trust in government that has been taking place since the early 1960s – a distrust that has been stoked by Republican rhetoric at every turn (“Government is the problem,” declared Ronald Reagan in 1980).

The goal for Republicans is to stoke distrust in the government, so they are more than happy to ensure that voters remain cynical. But underlying everything in the Democratic platform is the idea that government can play a positive role in addressing the challenges we face today. That's why, back in 2005, Barack Obama wrote that "our job is harder than the conservative's job."

I firmly believe that whenever we exaggerate or demonize, or oversimplify or overstate our case, we lose. Whenever we dumb down the political debate, we lose. A polarized electorate that is turned off of politics, and easily dismisses both parties because of the nasty, dishonest tone of the debate, works perfectly well for those who seek to chip away at the very idea of government because, in the end, a cynical electorate is a selfish electorate...

Our goal should be to stick to our guns on those core values that make this country great, show a spirit of flexibility and sustained attention that can achieve those goals, and try to create the sort of serious, adult, consensus around our problems that can admit Democrats, Republicans and Independents of good will.

Since Obama wrote that we've watched Republicans demonstrate a willingness to do everything in their power to block any sort of consensus around the problems we face. So perhaps it's time to stop worrying about a backlash. Knowing that Republicans will employ lies and disinformation campaigns regardless of what Democrats propose, it is time to go for broke on policies that will actually work to address the challenges we face, which is exactly what Biden, Pelosi and Schumer are doing.
But what about the specific tactics Republicans employ. Should Democrats embrace those as well? I say a profound "no" to that one. That doesn't mean being apologetic, uncertain, or hesitant. It simply means abiding by "the rule of law," even when the opposition does not. Specifically, it means everything from telling the truth to abiding by laws that handicap our side...until they can be overturned legally. It means holding out the ideal of having an informed debate about our differences, even as the opposition lies and demonizes our positions.
Waldman suggests that Republicans know how to wield power. If you are willing to throw away our democracy, I guess there's some truth to that. The GOP is engaged in an all-out assault on the truth and is attempting to undermine government institutions. Politicians and citizens are threatening everyone from election officials to school board members. They're working to suppress the vote and gerrymander congressional districts. On the heels of a violent attack on our Capitol to overturn an election, they are continuing to threaten violence if they don't get what they want. That is the kind of tyrannical power Republicans are wielding.
At this point, Democrats are the last line of defense against that tyranny. It is critical that at least one party upholds our democratic ideals. Without that, we sacrifice everything.
at September 06, 2021