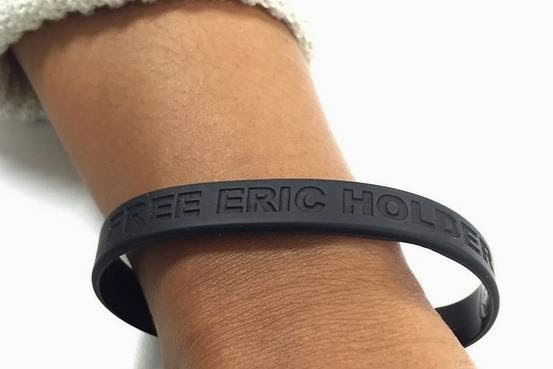 I can't tell you how much I LOVE this!


A new fashion trend is sweeping the halls of the Justice Department for spring – “Free Eric Holder’’ wristbands, an inside joke among Attorney General Eric Holder‘s top aides and supporters about the months-long political standoff over his successor.

The black rubber bracelets were the idea of Molly Moran, a senior Justice Department official, according to people who have received them. The wristbands, like the kind people wear to support various charities or causes, started appearing on staffers’ wrists a couple weeks ago, when it became clear there was no end in sight to the standoff over the nomination of Loretta Lynch...

Staffers have paid for the bracelets with their own money – not taxpayer funds – and have talked about making Free Eric Holder T-shirts as well.

“We’re hoping for a day we don’t have to wear these bracelets anymore, even if it takes a charity album,’’ joked one.

One of the best ways to deal with the kind of insanity we're seeing from Congressional Republicans over things like the Loretta Lynch nomination is to simply point and laugh. Good job on that front Molly!
at March 27, 2015