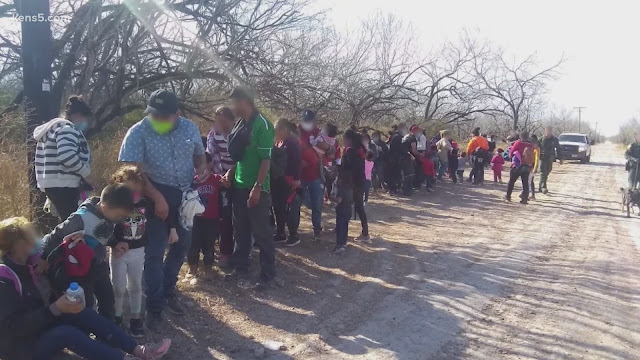 Republicans, who are struggling to come up with a way to demonize Biden, assume that they've landed on a gold mine in suggesting that the President's immigration policies have led to a surge of undocumented migrants on our southern border. For the most part, major media outlets are playing right along.

But as I've been suggesting for a while now, in order to understand what's happening, we need to start with the facts. So I decided to share a few of those with you.

It is always helpful to pay attention to an organization that has specialized in accurate reporting on this topic: Pew Research. A report from John Gramlich published on Monday included this graph of monthly apprehensions on our southern border. 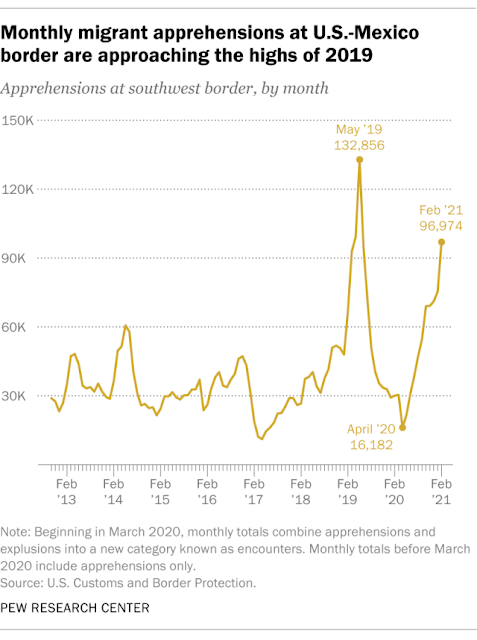 Apprehensions peaked in May 2019, dropped precipitously by April 2020, and have been on the rise ever since.
One thing to keep in mind about all of this is that there is a seasonal nature to migration. Border apprehensions have typically peaked in the spring – most often in March – before declining during the hot summer months, when migration journeys become more perilous. That pattern changed in 2013, about the same time that new arrivals from the Northern Triangle—predominantly families and unaccompanied children—doubled and migrants from Mexico began to decline.

All of that is important because, according to Pew Research, those patterns are starting to reverse.

It isn't clear yet how those reversals will play out. But it is very possible that the February spike in apprehensions could also be a return to the seasonal nature of migration. Only time will tell.
Republicans would have you believe that the current state of border apprehensions is entirely a result of changes Biden has made, expecting us to completely ignore everything else that might be impacting the situation. So perhaps it would be helpful to outline what, exactly, Biden has changed. On Tuesday, DHS Secretary Alejandro Mayorkas released a statement providing the facts about what the Biden administration has done. Here are the highlights:
As Gramlich documented, single adults made up 71 percent of those apprehended at the border in February, with families making up about 20 percent and unaccompanied children 10 percent. What that means is that when Republicans and the media throw around scary numbers about a surge of more than  100,000 "illegal crossings" in February, what they're not telling you is that approximately 90,000 migrants (single adults and families) were apprehended and expelled. The big change is in how the Biden administration is responding to unaccompanied child migrants—which explains why that is the group that is overwhelming the current shelter capacity.
As both Biden and Mayorkas have made clear, all of this is still a work in progress as they attempt to rebuild a humane asylum system that had been completely dismantled by the Trump administration. Anyone who critiques what is happening now should be pressed to identify which change Biden has implemented that caused the problem and explain why it should be reversed. But, of course, they won't do that. It is much easier to simply claim that Biden is implementing an "open border" policy...which is complete nonsense.
at March 17, 2021