The line dividing good and evil

If only there were evil people somewhere insidiously committing evil deeds and it were necessary only to separate them from the rest of us and destroy them. But the line dividing good and evil cuts through the heart of every human being. And who is willing to destroy a piece of his own heart?

My first job out of college over 30 years ago was as a counselor in a residential program for chemically addicted teenagers. I had lived an extremely sheltered life as a "good girl" and trained to be a teacher. When I graduated, there were no teaching jobs available. This one came along, so I took it. I didn't have to wait very long to learn I was in way over my head.

The kids in the program lived there for 6 months. During the first few weeks, we didn't see their families at all. After that, they joined us once a week for family therapy groups. I still remember one young man in the program who told me his story during those first few weeks. The abuse he had suffered at the hands of his mother was horrific. In some ways I dreaded meeting her. In other ways, I was anxious to do so and give her a piece of my mind.

I'll never forget what happened when I finally got that opportunity. I interviewed her privately before the group session and heard her story. The terrible things she had done to her son paled in comparison to what had been done to her as a child. My heart broke as she cried with me and I realized that she had actually come a long way in her life and was trying to do her best as a mother.

That experience early on in my career laid the groundwork for me in many ways both professionally and personally. I guess the old adage about never judging someone until you've had a chance to walk in their shoes sort of sums it up. I've found that no matter how evil someone has been in this life, if they're willing to honestly tell you their story...it all begins to make sense.

That doesn't mean I think we should excuse people for their behavior. When dealing with the mother I referred to above, we were all very clear with her that she was to NEVER hurt a child in any way ever again. And she was in the midst of paying the consequences for her actions. But when I heard her story - I felt a human connection with her and the compassion that comes from knowing that in her place, I might very well have behaved the same way.

I have recently been having similar questions since the Republican Convention was here in my town and I saw the way security was handled. The problem for me was that many of the people involved in all of that...the Mayor, the Police Chief, the Sheriff, the City Attorney, and the President of the City Council...are all people I have known for over 20 years. I consider most of them my friends. Beyond that, I know them well enough to know they are good people. But they were all involved in doing something that was horrific to me.

As Solzhenitsyn says, there is no such thing as an evil "them" to be banished from our midst. If we're going to get rid of or reduce evil in the world, we're going to have to find a way to sort it out in our own hearts.
at September 27, 2008 3 comments:

From The Field Negro this week, we learn the story of Fatimah Ali, a writer with the Philadelphia Daily News.

On September 2nd, Ms. Ali wrote a column titled We need Obama, not 4 more years of George Bush. In it she laid out the case that McCain and the Republicans will continue to deepen the divide between the haves and the have-nots in this country.

AMERICA is on the brink of a long, harsh and bitterly cold winter, with a looming recession that the GOP won't even admit to.

The policies of the current White House have brutalized our economy, yet the wealthiest think that everything is fine.

Rich Republicans just don't understand that millions are suffering. But many of their working class do, and they're beginning to abandon their own party.

After laying out the different economic focus of each candidate running for President, she says this.

If McCain wins, look for a full-fledged race and class war, fueled by a deflated and depressed country, soaring crime, homelessness - and hopelessness!

Plenty of Americans would rather stay in their dream state than to recognize the poverty sweeping across the country, right here, right now.

Matt Drudge picked up on the column and headlined his link "Philadelphia columnist warns if McCain wins, look for a full-fledged race war."

Of course he missed the whole point of her article and its focus on class instead of race. But his business is to inflame, not inform. And inflame he did. As a result of his headline, Ms. Ali was the recipient of all the hate Drudge knew he would stir up. She gives us a few of the more mild examples from the over 2000 she received in a follow-up column titled 'Race War' in America.

Pleeeeease bring it, we'll extinguish you.

I'd rather have an all out war than have [Obama] for president.

There will be race wars either way. Why? Because he's black.

I just realized after I saw your last name you're a damn rag head. You stupid S.O.B.'s want to take us back to the seventh century.

Syndicated talker Jim Quinn wondered if I'm some "liberal black Muslim" and (according to MediaWatch.org) fumed, "Get an American name if you want to be an American."

What struck me about all this is not the awareness that outright bigotry is alive and well in this country. If we don't know that, we're living with our heads in the sand. And Matt Drudge is a magnet for folks like that.

I think about what it means to be a person of color - especially one with a non-western name - in this country, and the reality that at any moment, words that would be dismissed as harmless if spoken by a white person become grounds for this kind of attack. Just as young black men need to be wary about "driving while black," columnists like Fatimah Ali need to be aware of what it means to be "writing while black." That is as much the legacy of racism as the words/actions of ignorant bigots.
at September 21, 2008 1 comment:

One of the things I value most in life is onoing growth and learning. I don't know if its genetic or learned, but there's nothing that I dislike more than stasis. This leads me to an almost knee-jerk reaction to conventional wisdom. There are certainly times that convention proves to be wise, but I almost always need to ask questions and learn why.

Over the course of my life, that has led to a kind of slow burn rebellion rather than the burst that I've seen so often when young people reject the status quo and/or authority. Perhaps I never had the courage to just outright rebel, but I think its also linked to not wanting to let go without really understanding where I'm heading as an alternative.

Questions that are easily solved or answered don't interest me that much. But when understanding or learning is more like peeling back the layers of an onion a little bit at a time...that's when I tend to get truly engaged.

A few years ago a friend of mine went to Russia. She brought back a set of nesting dolls as a gift. Little did she know that toys like this were my absolute favorite as a child...opening one to find a smaller one in side over and over again. 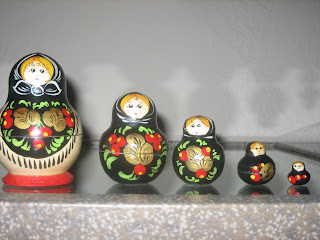 For years now, a topic that has provided fertile ground for this kind of peeling and learning in my life has been racism, or my own white privilege. What I have found is that once a part of it is observed and understood, another layer emerges for exploration.

For example, just last week I was talking with a young Latino man about some of my recent struggles with racism. Comparing his reactions to mine, I could see that I approached it all with an assumption about my role in the world that says I can fix anything that's wrong...including racism. It was clear that he's lived this issue so much longer and more deeply than I have that his reactions were completely different than mine. Sure, he validated that when I see things that are racist in nature, it is my obligation to stand up and do what I can to make changes. But he also recognized that if people can't hear, you move on to a place where that is a possibility. You let go. His was definitely not the voice of resignation to the status quo. It was the voice of experience in the world with what it means to be "other."

It reminded me of something Nezua wrote at The Unapologetic Mexican in his post titled The Skin of My Soul.

Mi novia says that it really frustrates White people that no matter how much they know or want to know, there may be an area of experience or knowledge that they cannot access. Bingo, Gringo.

This is another way of saying White Privilege....

The voice of privilege thinks no seat is unavailable, no land unconquerable, no food untasteable, no right deniable, no experience out of reach.

And then there's Jay Elias' sig line that really knocked me out recently. It's a quote from H.L. Menken.

The urge to save humanity is almost always a false face for the urge to rule it.

Doesn't that get to the heart of what US exceptionalism is all about? And isn't US exceptionalism just white privilege writ large? We know what's best for the world and we'll fix it for you. Oh, and since that's the case, of course you won't mind that we're in charge.

All that took me to one of my favorite passages in Alice Walker's book The Color Purple. Its a conversation that takes place between Celie and Mr.___ towards the end of the book when they have reconciled as friends.

Anyhow, he say, you know how it is. You ast yourself one question, it will lead to fifteen. I start to wonder why us need love. Why us suffer. Why us black. Why us men and women. Where do children really come from. It didn't take long to realize I didn't hardly know nothing. And that if you ast yourself why you black or a man or a woman or a bush it don't mean nothing if you don't ast why you here, period.

So what you think? I ast.

So I'm wresting a bit these days with all of that. I'm still busy asking questions. But I'm also trying to figure out what it means to experience the "wonder" that lives in them and to accept the fact that I'm not likely to always find the answers. But most of all, I'm trying to find that fine line between wanting to contribute to making things better and the seductive slide into savior mode. It's the next layer of this fascinating journey.
at September 13, 2008 No comments: