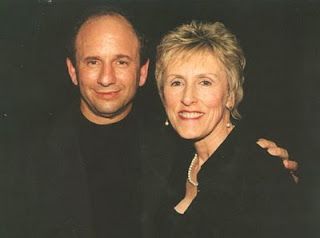 I was 10 years old when JFK was assassinated. I remember the day well. One of the questions my young mind asked as I watched the coverage on TV was why people were crying over the death of a politician.

Thirty-eight years later I understood. On October 25th that year, Paul and Sheila Wellstone were killed in a plane crash. I heard the news in the lunch room at work and ran to my office to listen to reports on the radio. I cried my eyes out.

Like many Minnesotans, I had the pleasure of meeting Paul and Sheila. But I can't say I was close to them. I just loved who they were and what they stood for. I knew the world was a bit darker place for their loss.

I still shed a few tears every year on this anniversary. That happened today especially as I read a tribute to Paul that was written 3 years ago by Ezra Klein.Here's just a bit of it.

Wellstone's populism was not an affectation, or a political posture. It was laced into the fabric of his personality. It's what made him different than other politicians. His measuring stick was not the poll numbers, not the editorial pages, not the political prognosticators, not the Sunday shows -- it was the farmers, the students, the seniors, the people. His fealty to them explains his frequent lonesomeness in the Senate. When the people are your judges, you can stand against the Iraq War in an election year, you can lose votes 99-1. You can fail to pass legislation, because you know the compromise would fail your constituents. "Politics is not about power," he would say. "Politics is not about money. Politics is not about winning for the sake of winning. Politics is about the improvement of people's lives. It's about advancing the cause of peace and justice in our country and the world. Politics is about doing well for the people."

Because of this, Wellstone had an immunity to the political trends that few politicians exhibit. When liberal was an epithet, Paul Wellstone wrote a book called The Conscience of a Liberal. When unions were in deep decline, Wellstone stood with them, and now the AFL-CIO now gives an annual award in his honor. After the Clinton health plan was crushed and Democrats retreated from health reform, Wellstone pushed for single-payer. While Clinton was chasing dollars to outspend and overwhelm Bob Dole, Wellstone was calling for full public financing. When progressives were marginalized and cowed by the right's cynical use of 9/11, Wellstone stood on the floor of the Senate, deep within the chambers of power, at the epicenter of cowardice and "responsible" hawkery, and roared on behalf of our ideals. That they were politically inconvenient never deterred him. "If we don't fight hard enough for the things we stand for," he said, "at some point we have to recognize that we don't really stand for them."

Sometime I wonder why the world isn't filled with people like Paul. And then I remember that he's inspired people like Ezra, who did a wonderfully compassionate and courageous thing on his blog today. And I think of my friend, Pakou Hang, who is sending out the ripples every day.

She posted this Teddy Roosevelt quote on her Face Book page in memory of Paul.

It is not the critic who counts: not the man who points out how the strong man stumbles or where the doer of deeds could have done better. The credit belongs to the man who is actually in the arena, whose face is marred by dust and sweat and blood... who, at the best, knows, in the end, the triumph of high achievement, and who, at the worst, if he fails, at least he fails while daring greatly.

I love this picture! 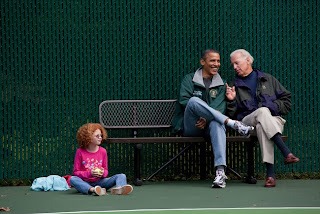 Best political ad of the season...period

Thanks to Steve Benen and Bill Simon.