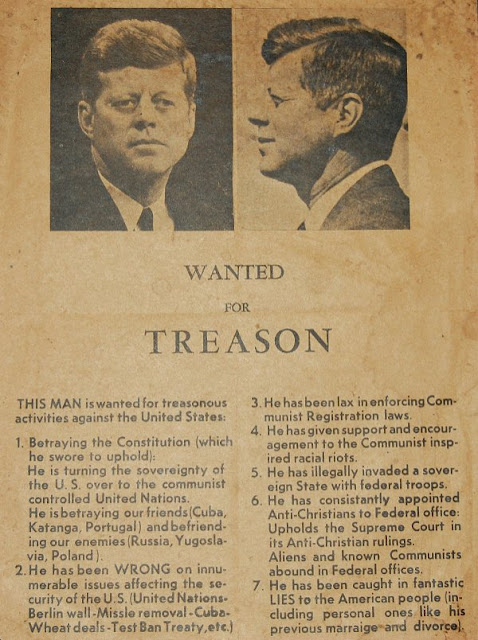 I've been thinking lately that I don't mind the idea that Republicans would disagree with President Obama or Hillary Clinton on policy issues related to things like the size of government and the role of this country around the globe. Those are things that we can discuss. What is unacceptable are accusations like the one's contained in that flier about "treason;" when opponents suggest that Democratic leaders aren't patriotic and are accused of giving aid and comfort to the "enemy" (no matter how that is defined). That isn't about political disagreement - it is about hatred being exploited by leaders in order to gain power. I suppose that as long as citizens in this country are willing to be exploited in that way...the hatred will continue.
at August 12, 2016 5 comments:

I recently ran across two stories about what things look like on the ground in Southwestern Ohio - a state where the RCP polling average gives Hillary Clinton a 2.6 lead over Donald Trump.

The first comes from a blogger at Daily Kos with the screen name mt41w. He attended the opening of a field office in "deeply red" Mason.


The fact that Hillary’s ground game is focused, extremely competent, hard-working and ready to GOTV was plain with the opening of the Mason, Ohio office on Wednesday evening August 10th. This was one of seven offices “opening for business” Wednesday in Ohio...

Anyhow, the house was literally standing-room-only. In the room where I stood and sweated — the A/C was overwhelmed — I counted 35 people, including the Channel 12 CBS Local News crew and cameraman. And I was in the smaller of six rooms in this converted house on Mason’s Main Street. I could see more people outside on the porch and sidewalk unwilling or unable to brave the crowded rooms, so I’d take a guess of perhaps 100-125 people in attendance...

The diversity as well as the size of the crowd was impressive. Lots of veterans of prior campaigns, and based on my chats, lots of newbies as well, the overriding theme being outright fear and rage at the danger Donnie presents to all of us.

* Everything is Organized (as I expect Hillary would want it to be) and clear!
* Enthusiasm is huge! The house wasn’t just full to over-capacity, it was rocking.
* Lots of encouragement and lots of posted advice on how to talk to people when phone-banking
* Mix of ages, backgrounds, genuine diversity — what makes the USA great.

Next comes a report from Jeremy Fugleberg about the Trump operation in Southwestern Ohio.


With the presidential election 90 days away, the Donald Trump campaign is scrambling to set up the basics of a campaign in Hamilton County, a key county in a swing state crucial to a Republican victory, a recent internal email obtained by The Enquirer shows.

The campaign has yet to find or appoint key local leaders or open a campaign office in the county and isn't yet sure which Hamilton County Republican party's central committee members are allied with the Republican presidential nominee.

"If they are against us, we just need to know," wrote Missy Mae Walters, Southwest Ohio regional coordinator for the campaign.

Even campaign materials, such as signs and stickers, aren't yet available.

"We have been promised they're on their way," she wrote.

The campaign plans to open 25 Trump "Victory Centers" statewide, she said, but a planned Monday opening of an office in Kenwood got held up waiting for a legal department sign-off.

It's hard to say whether this lack of organization is the result of incompetence or something else. Here is what Trump told Eric Bolling last night:


“I don’t know that we need to get out the vote,” the Republican nominee concluded. “I think people that really want to vote, they’re gonna just get up and vote for Trump. And we’re going to make America great again.”

Now that the conventions are over, this campaign comes down to debates and ground game. With growing speculation about whether or not Trump will actually show up for the former, this is the state of affairs in the crucial swing-state of Ohio on the latter. I hope we'll see more reporting like this on the ground over the next few months. It tells an important tale that is missing from the focus on polling and big rallies.
at August 12, 2016 No comments:

How President Obama Moved the Overton Window to the Left

I first started paying attention to Barack Obama about the time he won the Iowa primary in 2008. Prior to that, I figured he was just another insurgent candidate who would make a name for himself by challenging Hillary Clinton - but would ultimately lose.

The closer I looked, the more intrigued I became. Eventually it seemed to me that he was a very different kind of politician and that most pundits were viewing him through a lens of what they expected, rather than being genuinely curious. That's how I started my blogging career - by trying to understand who this guy was and how he operated.

From the beginning, one of the few pundits that seemed to be peeking behind the curtain of conventional wisdom was Richard Wolfe. That's why it is no surprise to me that - as we near the end of Obama's second term - he has written one of the most intriguing essays about how this President has contributed to the implosion of the GOP.


It may seem too early to call, but we already have a winner in the 2016 election.

He’s someone the pundits wrote off long ago. An improbable outsider who rode an insurgent wave to snatch the nomination from the establishment. An unconventional politician whose raucous rallies underscored his appeal to voters far outside his party base.

His name is Barack Obama. And he can thank the freak show that is Donald Trump’s Republican party for restoring his stature as a unifying, national leader with a moderated and mature approach to a complex and unstable world.

Eight years ago, Obama represented an existential threat to the Republican party, and not just because he was going to lead the Democratic party to win the White House and Congress by large margins.

No, Obama’s biggest threat was that he could realign American politics, shifting it fundamentally towards progressives for a generation...

So the GOP leadership chose to make Obama unacceptable, unpalatable and un-American...They would not reform their policies or consider the root cause of their defeat. Instead, they would oppose Obama on everything, well before he tried to pass a giant stimulus bill or healthcare reform...

If your political priorities are the total defeat of a single politician – not the advancement of your own policies through debate or legislation – then you are already in pretty desperate shape. You render it impossible to compromise with your opponents, and you fan the flames of extremism that will burn anyone in the center.

That is basically what I have been writing about the Obama era for quite a while now. I would simply add one thing - Wolfe does a great job of describing how Republicans reacted to this President. But he leaves out how Obama played a role in framing their options.

Conventional wisdom holds that President Obama was naive in pushing for bipartisanship during his first term when the Republicans had crafted a strategy of total obstruction. Liberals were angered that he continued to offer fig leaves towards compromise when he should have known that the opposition had no intention of meeting him halfway.

But let's imagine for a moment that the President had taken their advice and only offered progressive policy proposals. Republicans would have continued to obstruct. But they could have done so by aligning with more centrist positions themselves. By inhabiting large swaths of the political continuum, Obama left them no choice but to become more extremist in their obstruction.

That is what I have often called "conciliatory rhetoric as a ruthless strategy." In a sense, it gave the President a win/win position in the long term: either Republicans worked with him and fulfilled his vision of being a unifying figure in American politics, or they backed themselves into an ever more extremist corner - threatening their survival as a party.

After having laid that foundation in his first term, Obama implemented his "pen and phone" strategy and developed a succession plan during his second term.

Liberal critics of this President usually claim that he has failed to move the Overton Window to the left by not making enough use of the bully pulpit. What I propose is that there is more than one strategy for shifting that window. It took a while to come to fruition - but Obama has shown an alternative for how that can be done.
at August 12, 2016 2 comments: