My response to Porochista Khakpour

Yesterday the New York Times published an ope-ed by Porochista Khakpour titled My Nine Years as a Middle-Eastern American. While she captures her own personal experience in the detail, I'm sure her thoughts and feelings speak for many Middle-Easterners in this country today.

A deep dark admission: lately — and by lately I mean this era I worked so hard for, when a liberal person of color, a man who resembles my own father, would be our president — I’ve found myself thinking secretly, were certain things better in the George W. Bush era? Was it easier to be Middle Eastern then?

Just six days after 9/11, at the Islamic Center of Washington, President Bush said, “Those who feel like they can intimidate our fellow citizens to take out their anger don’t represent the best of America, they represent the worst of humankind.” He added: “The face of terror is not the true faith of Islam. That’s not what Islam is all about. Islam is peace.” Did that assurance mean more to white Americans coming from someone who looked like them?

Xenophobia and racism still abounded, but the lid stayed on the pot. Perhaps when Republicans held both the White House and Congress, conservatives weren’t sweating a thing; for them, people of color, along with all our white liberal friends, were lumped together in one misery-loves-company fringe. But now that the tables have turned, conservatives have positioned themselves as aggrieved victims. (I recall the advice of an older female relative: Always let men you’re in relationships with have all the power; it’s when they lose power and get insecure that your problems start.)

These words reminded me of those from Derrick Jensen in his book The Culture of Make Believe.

So yes, the lid has come off the pot and things are exploding. Our ideals as a nation are being tested...are we a country of hate, consumed by fear and the illusion of revenge, or are we one that is still striving towards that more perfect union.

Of course, the answer to the slavery question was already embedded within our Constitution — a Constitution that had at its very core the ideal of equal citizenship under the law; a Constitution that promised its people liberty and justice and a union that could be and should be perfected over time.

And yet words on a parchment would not be enough to deliver slaves from bondage, or provide men and women of every color and creed their full rights and obligations as citizens of the United States. What would be needed were Americans in successive generations who were willing to do their part — through protests and struggles, on the streets and in the courts, through a civil war and civil disobedience, and always at great risk — to narrow that gap between the promise of our ideals and the reality of their time.

This was one of the tasks we set forth at the beginning of this presidential campaign — to continue the long march of those who came before us, a march for a more just, more equal, more free, more caring and more prosperous America. I chose to run for president at this moment in history because I believe deeply that we cannot solve the challenges of our time unless we solve them together, unless we perfect our union by understanding that we may have different stories, but we hold common hopes; that we may not look the same and we may not have come from the same place, but we all want to move in the same direction — toward a better future for our children and our grandchildren.

Khakpour ends her article with this heart-breaking story:

Every day, I lose America and America loses me, more and more. But I should still be in my honeymoon phase, since I’m actually just a 9-year-old American. And that’s my other association with autumn 2001. As luck would have it, my citizenship papers finally went through not long after the towers fell. That November, I was in a Brooklyn federal courtroom singing, along with a room full of immigrants, the national anthem that I hadn’t sung since K through 12.

I remember on that day, 9/11 leaving the foreground of my mind for the first time. I remember looking around that room and feeling, in spite of myself, a sense of optimism about the future. I remember feeling a part of something. I remember feeling thrilled at the official introduction of the hyphen that would from now on gracefully declare and demarcate my two worlds: Middle-Eastern American. The same hyphen that today feels like a dagger that coarsely divides had once, not too long ago at all, been a symbol of a most hallowed bond.

To Porochista I want to say I'm sorry...sorry that we are so far from perfecting our union today. But I also want you to know that many of us are out here wondering what we can do to embrace you and affirm that you are a part of us. We want to rekindle that sense of optimism about the future you felt nine years ago. Sometimes we don't know what to do. If we yell and scream like the haters are doing, we just add to the divide. And yet, to remain silent is to abandon our brothers and sisters like you.

So for today, I'll just say that I stand with you and that we lose America if we lose you.
at September 12, 2010 No comments:

A picture worth a thousand words 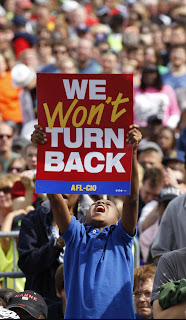